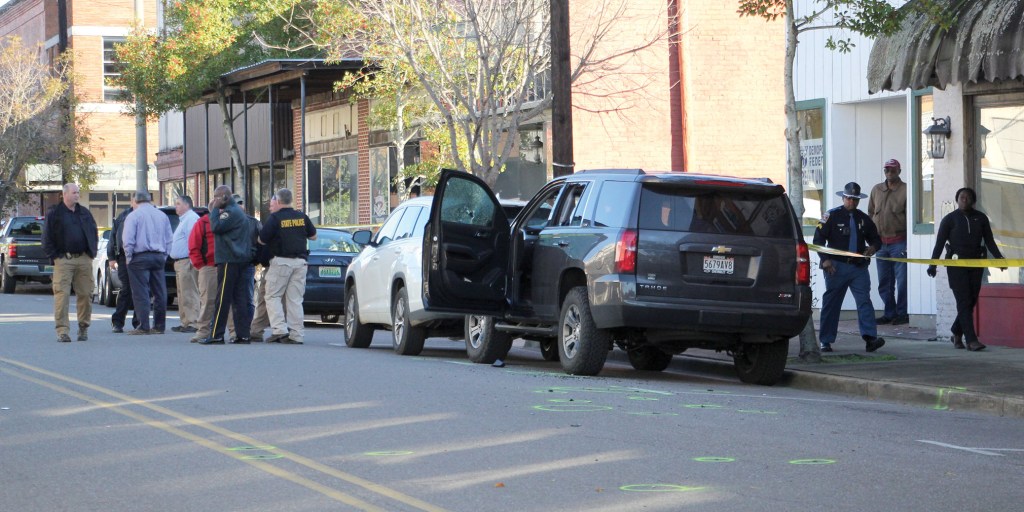 State Bureau of Investigation officials along with other law enforcement investigate the scene where District Attorney Greg Griggers was shot Thursday afternoon when a gunman fired into his vehicle. The suspect, Steven Smith Jr., was shot and killed near the scene by law enforcement.

Seventeenth Judicial Circuit District Attorney Greg Griggers was wounded Thursday afternoon when a gunman shot into his vehicle parked outside his office in downtown Demopolis. Law enforcement officials at the scene returned fire and killed the suspect.

According to law enforcement officials, at approximately 1 p.m., Griggers was returning to his E. Washington Street office from having lunch when a gunman, identified as Steven Smith Jr., a former state trooper, opened fire on his vehicle. State Bureau of Investigation Capt. Jason Roberts described the incident as an “ambush-style” shooting. 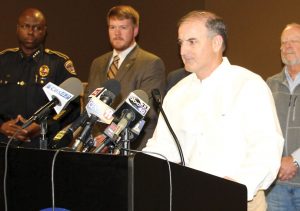 Officials said Griggers’ injuries were minor and that he was transported to Bryan Whitfield Memorial Hospital where he was treated and released later the same day.

“I want to thank the two men who made it possible for me to be here, Cole Basinger and Leslie Hines … I’m in a debt of gratitude, as is my family, that I won’t ever be able to repay. I thank all the other law enforcement that responded so quickly,” Griggers said during a press conference Friday. “Just to put some of the speculation and rumors to rest, I’m good and I’ll be back to work Monday.”

After Smith fired on Griggers’ vehicle, law enforcement officials who were there exchanged fire with Smith who was shot and pronounced dead at the scene, according to Demopolis Police Chief Tommie Reese. “The district attorney has officers around him all the time, in this case they were coming back from having lunch together,” Reese said.

Roberts said that Smith had worked as a state trooper from 1982 until he was fired in 1996, adding that investigators are still looking into Smith’s past and that the motive for Thursday’s shooting is still unknown. 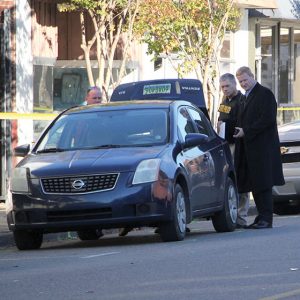 Across Washington Street from where Griggers was parked when the shooting occurred, SBI Capt. Jason Roberts, far right, and other law enforcement officials inspect another vehicle.

This is not the first time Smith was involved in a case involving a public official. According to a 1998 document filed by the Alabama Court of Civil Appeals, Smith was interviewed as part of an investigation in a 1996 incident involving a gun being fired into the Livingston home of 17th Judicial Circuit Court Judge Eddie Hardaway. At that time, Smith had complained about the handling of that investigation. Smith was advised by his superiors not to speak to the press about the situation, but he did send at least two letters to the editor to the Sumter County Reporter-Journal, criticizing the Alabama Bureau of Investigation’s handling of the case. He was terminated as a state trooper and would lose an appeal in 1998 decision.

Smith, nor anyone else, was ever arrested for the shooting at Hardaway’s home.

Griggers has served as District Attorney for the circuit since being appointed in 2003, most recently winning re-election in 2016.

Chief Reese encouraged the public to keep the Griggers family and those at the district attorney’s office in their thoughts and prayers.

“I’ve known [Griggers] for 20 years or more; he is a great friend and a great prosecutor. The job he does bring about some enemies, but in our community, and across our circuit, he is well liked and well respected,” Reese said.

As law enforcement responded to the shooting, local schools were placed on lockdown as a precaution.

Anyone who witnessed or may have information on the shooting is encouraged to call the Demopolis Police Department at 334-289-1475 or the State Bureau of Investigation at  1-800-392-8011.

(This article originally appeared in the Saturday, November 17 issue of the Demopolis Times.)