Councilman William Bryant presented a list of fire hydrants from the Linden Fire Department that needed to be replaced, added, repaired or removed throughout the city to the Linden City Council at Tuesday’s meeting. 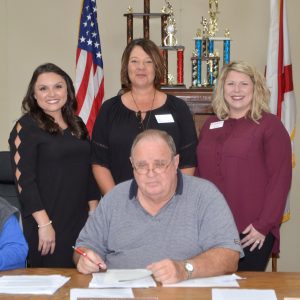 The fire department requested that a fire hydrant is replaced at 136 Grace Circle and another removed behind Linden Elementary School. They also asked that a fire hydrant be placed at 306 Wolf St., Veal Street and 6th Avenue W each as well as a hydrant be repaired on Brandon Avenue and Shiloh Street each. Moore said the list would be given to the Public Works Department.

Councilwoman Jan Cannon also told the council that Martin Luther King Drive needs one more speed breaker. Moore and Police Chief Robert Alston both agreed with her, but wanted to wait to assess the effectiveness of the current speed breakers.

Moore also said he has gotten requests for speed breakers on other streets, as well.

“We’ll do a better job on the speeders. It will stop some of them,” Moore said.

Other items discussed by the council include the following:

• Moore signed a proclamation on behalf of Comfort Care Hospice recognizing November as Hospice and Palliative Care Month in Linden.

• Moore told the council of his plan to find someone to cut and remove the light poles from Scott Park in a way that saves the light fixtures to prevent extra costs for replacements.

• The realtor responsible for the property that Jack’s Family Restaurants were interested in purchasing requested that the tax abatements offered to the company apply to other buyers. Not wanting the abatements to apply to a buyer without the council’s approval, City Attorney Woody Dinning suggested the council require that the realtor bring forth the offer for the council to consider once a buyer was in place, which was accepted by the council.

• Eagle Internet sent a proposal to the council to provide internet at city hall, the fire department, the utility shop and the Meals for the Elderly building for a non-recurring total installation fee of $780 across the four sites and a net monthly cost of $478. The proposal was not accepted for lack of motion.

• approving the request for a police officer to place a mobile home at Scott Park. According to Secretary to the City Council Bruce Ward, municipal employees sometimes live at the park as security.

• Moore told the council that the bids are now being accepted for a project involving upgrades to the lagoon, and he expects work to begin in “the middle of winter”.

• declining to donate to the Fountain of Youth Community Center as the city council is not authorized to use public funds for donations.

• The mayor also notified the council that the water pump at the city’s well was broken and needs to be replaced. According to Ward, this does not interrupt resident’s water service and the work on the pump was still taking place as of Friday.