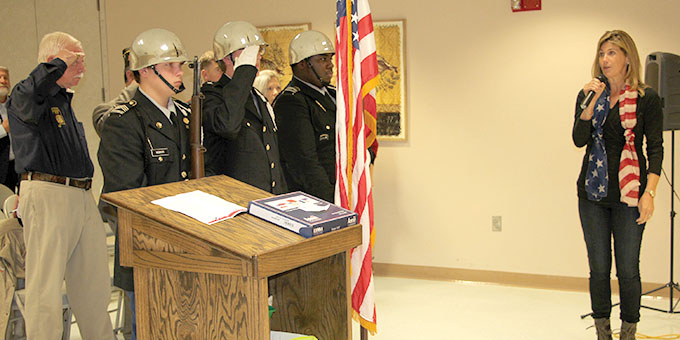 With rain falling outside, the ceremony was moved indoors at the hospital and the flag ceremony, which consists of changing the colors that fly outside the hospital, was cut from the program.

Despite those changes, the program moved forward in saluting veterans. The Demopolis High School JROTC presented the colors as Jill Tutt performed “The Star Spangled Banner.” Also assisting throughout the program was the crew of the Coast Guard Cutter Wedge and Boy Scout Troop 41.

“We are all touched by the sacrifices of veterans and their families,” Drake said. “We all serve our great nation in some way.”

The featured speaker was Lt. Col. (Ret.) Paul James III who was joined by his son, Lance Cpl. Paul James IV, who is a current member of the U.S. Marine Corps Reserves.

James III served 32 years through the active Army as well as the Army Reserves and Army National Guard. Through those years he has served in Kuwait, Kabul and Afghanistan.

James IV was deployed to Southern Afghanistan as part of Operation Freedom Sentinel from January to July 2018.

“The service members we honor today come from all walks of life, but they share several fundamental qualities: courage, sense of service, pride, determination, selflessness, dedication to duty, and integrity … all the qualities to serve a cause bigger than oneself,” James III said.

Following the speaker, the battle hymns for each branch of the armed forces were played as those who served stood.

Members of the Cutter Wedge also recognized those Vietnam War veterans with pins, if they were not present for a ceremony held earlier.

Post 5377 Chaplain Rev. Jessie Moore provided the opening and closing prayer and the event concluded with refreshments and an opportunity to purchase Poppies, which is the VFW’s primary fundraiser to help with its veterans programs.