Brian Tripp, a teenager and 2018 graduate of Demopolis High School, was killed in a motorcycle accident Monday afternoon. 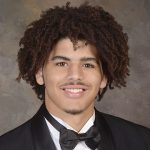 Demopolis police officers responded to the scene at approximately 3:45 p.m. The incident occurred just across the county line, at the intersection of highways 80 and 69, in Hale County. State Troopers are investigating the accident and attempts to reach them Tuesday were unsuccessful.

Tripp, who joined the U.S. Army after graduating, was home on leave.

For those who knew him, Tripp is described as a warm, caring person who had the ability to lift the spirits of those around him. He was a class favorite at Demopolis High School and was especially active in the arts, both with the Tiger Arts Guild at DHS and with the Canebrake Players.

While Tripp graduated in June, Hathcock said many still at DHS will miss him.

“He was an active student. The teachers all thought very highly of him and he still has friends here,” he said. “It’s going to be a difficult time for all of those who knew him and our thoughts go out to his family.”

The family will receive condolences and visitation on Sunday, Nov. 25, 11 a.m. to 2 p.m., inside the DHS auditorium. A memorial service will follow in the gymnasium beginning at 3 p.m. Larkin and Scott Mortuary is in charge of arrangements.

(This article originally appeared in the Wednesday, November 21 issue of the Demopolis Times.)