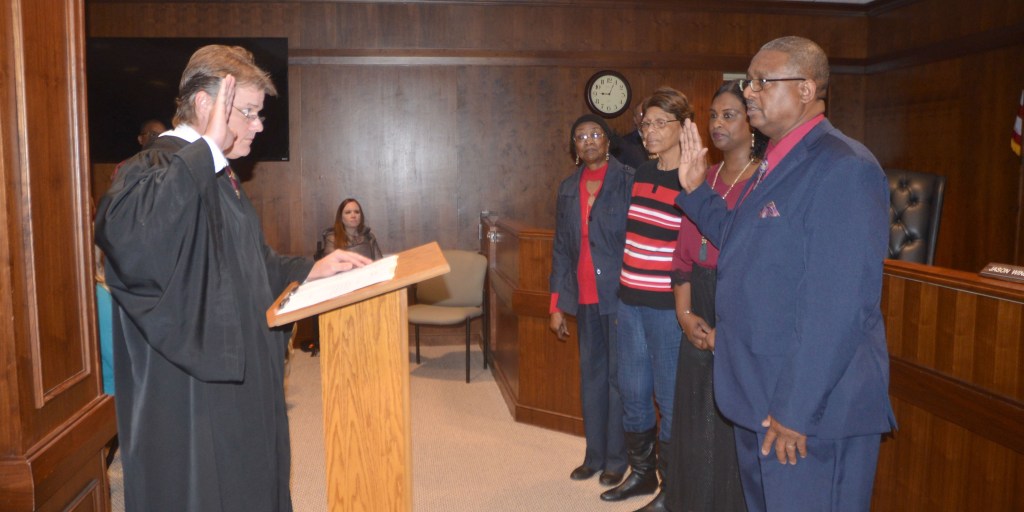 Terry Hinton is sworn in as the District 3 Marengo County Commissioner by District Judge Vince Deas.

“On behalf of the district court, I wish you the very best in what it is you do. You’ll never know what you mean to the citizens of this county and all municipalities within and, in a large scale, the state of Alabama,” Deas told the commissioners.

The commission also approved a contract with Atlantic Group reflecting planimetric mapping services in order to fly the county and provide a detailed map of the area in conjunction with the state’s aerial imaging program. Revenue Commissioner Sharon Hilbish also informed the council that the state is revising its contract to place the Alabama Department of Transportation in charge of the program rather than the Alabama Law Enforcement Agency. The approximate cost of the contract was included in the 2018-19 budget as part of Hilbish’s reappraisal fund. The total cost to the county will be $51,721.50.

Later in the meeting, the commissioners adopted a resolution for a funding agreement for $83,374.55 to conduct emergency repairs to a slide on CR 33.

• Circuit Clerk Kenny Freeman stood before the commission to thank the county’s detention officers for performing what he describes as a “thankless job.”

“They go through so much, and I don’t think anybody really realizes what they do,” he said.

• Kimberly Bonner from Dallas County Juvenile Detention Center and Camp Perry Varner Educational Treatment Facility approached the council to thank Marengo County for using the facility and to remind the county that their purpose is to serve the youth in the area. She told the commission that “We want you to know that we work for you.”

• approving Cupidean Davis and Jean Norwood to the Marengo County Public Library Board, as recommended by Library Director Joyce Morgan.

• approving the Marengo County Public Library hire a new part-time worker to work in the library and drive the Bookmobile van. Morgan assured the commission that it was within budget and would not cost the county anything extra.

• approving the commission meeting days in 2019.

• Probate Judge Laurie Hall took a moment to thank all poll workers for election day and announce that the county had close to a 60 percent voter turnout rate.

• Leadership Marengo observed the commission meeting. At the close of the regular session, Katheryn Friday, a member of the program’s steering committee, told the commission “We are glad to be here. I think it’s very good for the leadership class to see the commission.”

• entering executive session based on general representation of character.

• following the executive session, the commission accepted the donation of a building on Coats Avenue from the First Bank of Linden.

(This article originally appeared in the Saturday, November 17 issue of the Demopolis Times.)