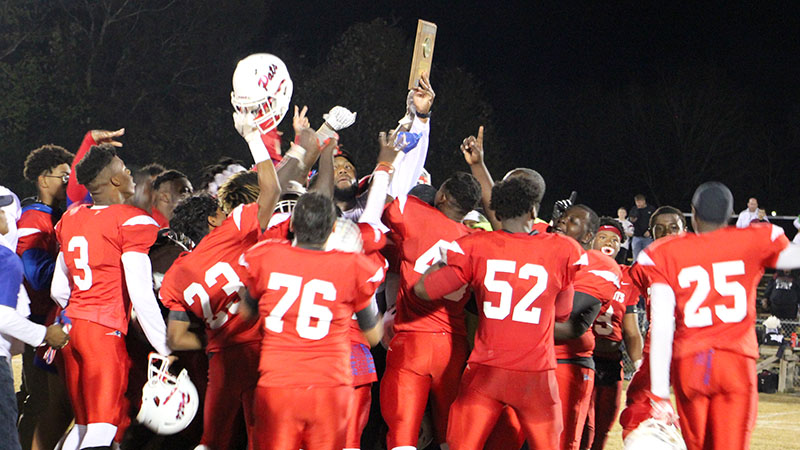 Linden Head Coach Demetris Jackson holds up the semi-finalist's winner trophy as the Patriots celebrate a berth in the 1A Super Six state title game.

Linden will be playing for its first state championship after defeating Maplesville in the semi-final Friday night, 16-8.

The Patriots used a stout defense while the offense hit home with two long touchdown passes on their way to the victory, which leads the way to Jordan-Hare Stadium in Auburn for the Super Seven Championship where they will play Mars Hill Bible School.

LHS Head Coach Demetris Jackson praised his team’s defense for their performance after Friday night’s victory, pointing out that the Devils’ only points came on a kickoff return. 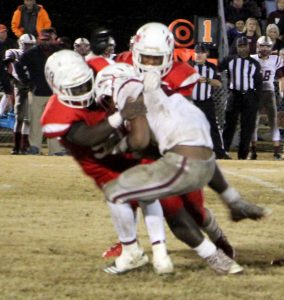 Linden defenders get in the backfield to stop a Maplesville runner for a loss.

“Our defense played great … they really had a shutout, they overcame some turnovers and played a heck of a game. On offense, our playmakers showed up when they needed to. This is a great victory for our team, our school and our community,” Jackson said.

The first quarter was mostly about defense as Maplesville intercepted a pass on Linden’s first possession. But, the defense shut the door on the Devils’ following drive, stopping them on a fourth-and-one play at midfield.

Taking over at their own 49, Douglas Johnson took the first handoff for a couple yards. On second down, Graderius Brown found Joshua Williams on a slant route who hauled in the pass and outran defenders for a 49-yard touchdown. The Patriots were successful on a two-point conversion to take an 8-0 lead with 2:43 to go in the quarter.

Linden would see two consecutive late-half possessions end with interceptions, but the defense held off the Devils to preserve the eight-point lead as the teams went to halftime. 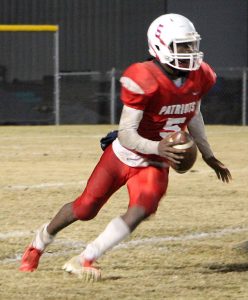 Linden saw their first possession of the second half end with another turnover, but the defense continued to hold, forcing the Devils to punt on their next two possessions on consecutive three-and-outs.

Late in the third, Brown hit fellow senior Kevin Green who shook off a defender and sped down field for a 40-yard touchdown. Brown would run the ball in for a two-point conversion, giving the Patriots a 16-0 lead with 1:54 to go in the third quarter.

On the kickoff, Maplesville would fumble the ball, but picked it up and found a hole, going about 70 yards for their only score of the game.

The Patriot defense was outstanding down the stretch. Maplesville had five possessions after cutting the lead in half, but never managed a first down. In the end, the victory was sealed when Brown made a play on defense, hauling in an interception with about two minutes to go. 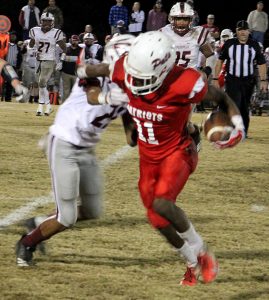 Senior Kevin Green shakes off a defender on his way to positive yardage.

“You never underestimate Maplesville … you have to keep playing until the game is over and that’s what our players did. We made some mistakes, but they kept playing hard,” Jackson said.

The win improves on Linden’s perfect record, which stands at 13-0. This is the team’s second appearance in the ASHAA’s Super Seven.

The Patriots will face a 13-1 Mars Hill squad that defeated Pickens County, 20-12, in the semi-finals and were the champions of 1A’s Region 8. This is also Mars Hill’s first appearance in the Super Seven.

Kickoff between Linden and Mars Hill in Auburn is set for 3 p.m.

(Editor’s Note: This article includes a correction that this is Linden’s second trip to the AHSAA Super Seven, not their first as originally reported.)