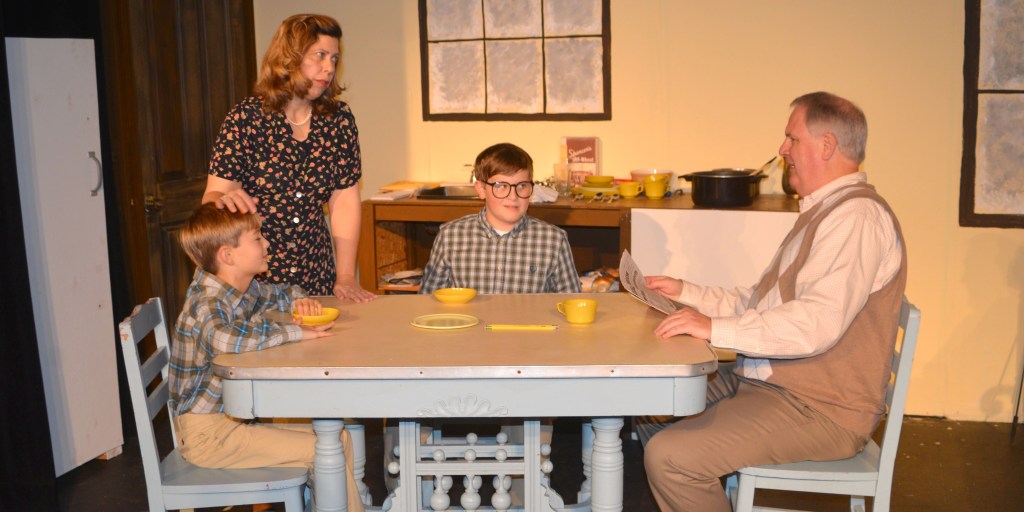 Ralphie and his family are portrayed by, from left, Lawson Boone as Randy, Donna Bishop as Mother, Ben Lindsay as Ralphie and Lee Jordan as The Old Man.

The play centers around Ralphie Parker as he tries to get the ultimate Christmas gift, a Red Ryder BB gun, and is narrated by Ralphie’s adult self.

“It’s a really fun and a really good story, and I think a lot of us can remember having that one Christmas gift when we were little that we would have done anything to get,” Director Kelley Mullins said.

This is not the production’s first round with the Canebrake Players. Mullins said the play first saw the stage at the Old School on Main about 20 years ago.

As a member of the organization’s board and as the director, Mullins said she felt it was time to host the production once again.

“We don’t like to repeat things, and if we do we like a long span of time between them, so I felt like it was time to bring it back,” she said.

Haven been part of the Canebrake Players since she was nine and taking up her first directorial position two year ago, Mullins said helping the cast develop their characters as was once done for her was her favorite part of putting on the play.

However, “A Christmas Story” didn’t come without its challenges. With the play being set in the 1940s and being heavily dependent on props, Mullins said set design was the toughest aspect to nail down.

Mullins gave the production a PG rating due to depictions of bullying, but said that she still sees it as great family-friendly entertainment. “I think it’s a really great play to continue the holiday season in Demopolis and in the area,” she said.

Tickets for “A Christmas Story” are $12 for adults and $8 for students. No charge for children aged four and under. The Old School on Main is located on 601 N. Main Ave.

(This article originally appeared in the Wednesday, December 5 issue of the Demopolis Times.)