Tommie Reese recently announced his resignation as the Public Safety Director and Demopolis Police Chief as he accepted a position with the Alabama Attorney General’s Office.  His resignation is effective Dec. 26.

Reese, a native of Demopolis, has served as police chief for the city for almost 10 years. He said leaving the post is bitter sweet. 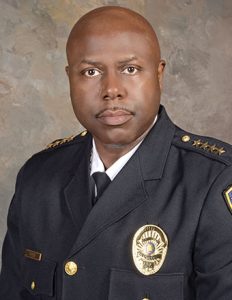 “I loved being police chief and working in my hometown,” Reese said. “It was not an easy decision, but sometimes change is good and the time seemed right.”

“I am pleased that Chief Reese will serve as my new liaison with Alabama’s law enforcement community,” Marshall said. “Chief Reese brings over 30 years of varied law enforcement experience from the State to the local level and is well known and respected by his peers.  In particular, he has served the people of Demopolis and Marengo County with distinction and I look forward to his leadership on my team come January.”

Reese said he looks forward to the new challenges ahead.

“It will be a privilege to continue my professional career by serving the men and women of law enforcement and the citizens of the State of Alabama in this position.  I look forward to continuing the good work of those who served before me, while making Alabama an even better place for its citizens.”

Mayor John Laney said  Reese’s presence as a member of city government will be missed.

“I look at Chief Reese as a quality employee and a friend. His contributions to our city is very much appreciated and respected. I accepted his resignation with reluctance, but I understand this is a great opportunity for him,” Laney said.

The City of Demopolis is assembling a panel of police chiefs from across the state who will screen applicants with the goal of finding suitable candidates for the position. The city council will ultimately vote to decide who will fill the position.

Depending on the candidate pool, Laney said the search could take months. Up until a new chief is named, Capt. Rex Flowers will serve as acting police chief.

While Reese may be leaving the police department, he will continue to live in Demopolis.

“The citizens of Demopolis have been very good to me. In law enforcement especially, you can’t please everyone, but I believe in my heart that I always did the best that I could do … I’ve centered my life around that and treating people the way I want to be treated. Police don’t always make a lot of friends, but we have a solid base of support here and I want to thank everyone for their support and helping make Demopolis a better place to live,” he said.

During his tenure as chief, Reese has implemented multiple programs designed to bridge the gap between law enforcement and the community, including a Citizens Public Safety Academy and a Youth Leadership Academy. He also developed a process for increased and ongoing training for officers, as well as offering training programs for the public, including self defense and active shooter training. He also purchased a mobile command post for the department, which was paid for with no tax dollars.

He also restructured the police department into two divisions, Field Services and Support Services, and developed procedures for hiring as well as standards for promotions. DPD officers were also assigned to wear body cameras prior to the Ferguson, Missouri shooting that led many departments to implement  the cameras.

In 2017, Demopolis was named one of the safest cities in Alabama by the National Council for Home Safety and Security.

“Anything that has been done to improve our department would not have happened without our officers,” he said. “They have bought into these programs and they are the ones that make them work. I could never express my full appreciation for their hard work and dedication.”

Reese began his law enforcement career with the Alabama Department of Public Safety in 1985. He later joined the Demopolis Police Department as a patrolman. In 1991, he joined the Marengo County Sheriff’s Office as a deputy sheriff. In 1994, he was appointed to chief deputy where he served until he was appointed chief of police for the City of Demopolis in 2009.