Heavy rainfall threatens I-20 corridor from Texas to Carolinas 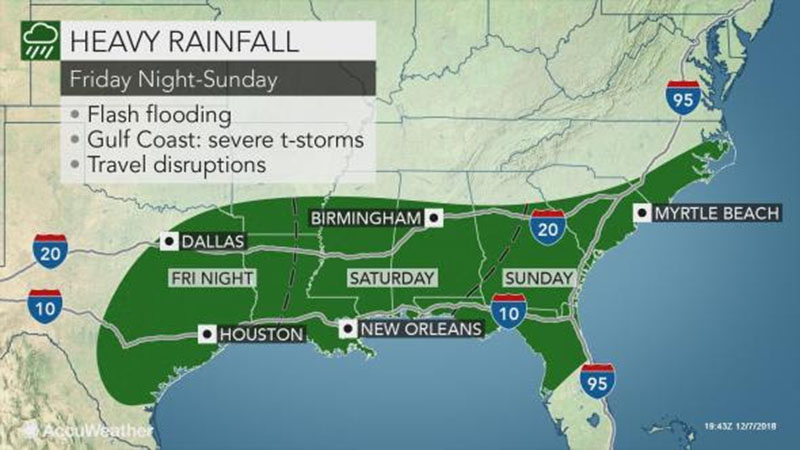 While areas from northwestern Texas to northern Arkansas can expect ice and snow from the storm, disruptions due to rain and flooding are likely along the Interstate 10 and I-20 corridors.

Airline passengers at the major hubs of Dallas, Houston, New Orleans and Atlanta can face significant delays. Ripple-effect delays can spread elsewhere across the country.

Very heavy rainfall and flooding will be a big threat with this storm, according to AccuWeather Meteorologist Ryan Adamson.

Most areas from the lower Mississippi Valley to the southern Atlantic Seaboard received above-normal precipitation during the month of November, leaving the ground saturated and making it harder for additional rainfall to soak in.

Soaking rain will first gather over central, southern and eastern Texas and spread into southern Arkansas and northern Louisiana on Friday and Friday night.

While greatest risk to lives and property will be from flooding, feisty thunderstorms that can inflict damage cannot be ruled out.

The greatest risk of severe weather, including the potential for a few isolated tornadoes, is over portions of South Texas on Friday night.

This includes the cities of Corpus Christi and Houston.

Download the free AccuWeather app to receive the latest severe weather alerts and know exactly when rain and storms will arrive in your area.

Drenching rain and locally severe storms will plow eastward over the weekend.

People with hopes to pick out a Christmas tree or put up holiday decorations outside will have plans ruined by rain in Baton Rouge and New Orleans, Louisiana; Jackson and Biloxi, Mississippi; Birmingham and Montgomery, Alabama; and Atlanta on Saturday.

The downpours will then sweep through much of Georgia, northern and central Florida and South Carolina from Saturday night to Sunday.

During the storm’s journey from Texas to the southern Atlantic Seaboard, rainfall amounts will range between 2-4 inches with an AccuWeather Local StormMax™ of 8 inches possible.

Such amounts can trigger street, urban and stream flooding, especially since the ground is already soggy.

“Urban flooding can be made worse in areas where leaves have fallen and block storm drains,” Sosnowski said.

Along with the flash flooding, locally severe storms can pose an added risk along the Gulf coast.

Coastal areas from Louisiana to the Florida Panhandle may experience such storms during the first half of the weekend, before the threat shifts into the Florida Peninsula on Sunday.

Damaging winds and flooding downpours will be the greatest threats along this swath, but isolated tornadoes cannot be ruled out.