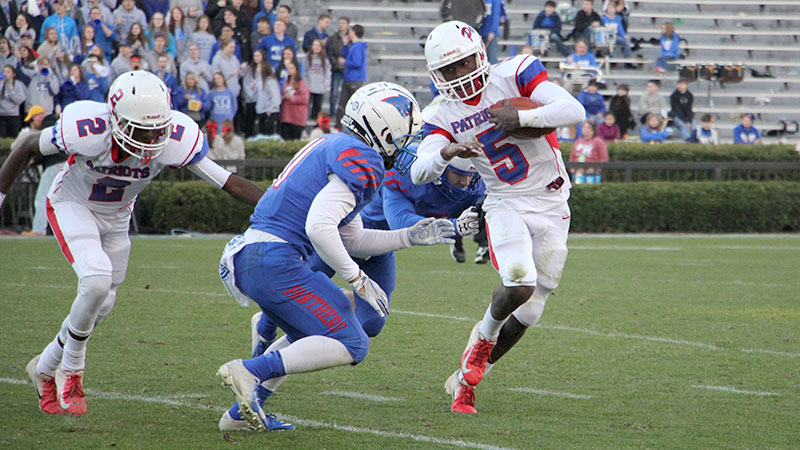 The Linden Patriots’ perfect season came to an end one win short of a state title as they fell to Mars Hill Bible School, 53-26, in the AHSAA Super Seven 1A State Championship Game.

The bruising Wing-T running game for Mars Hill proved too much for the Patriots, as they gained 368 yards on the ground. Leading the way for the Panthers was Colt Smith who ran for 168 yards and scored five touchdowns, which tied a Super Seven record. Smith started the scoring with a 65-yard touchdown run on the first play from scrimmage and scored the last touchdown, an interception he returned 35 yards. 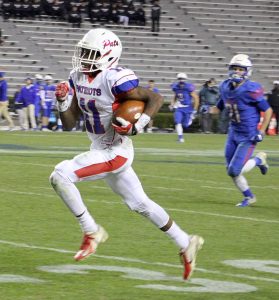 Kevin Green runs to the endzone for an 85-yard touchdown, the second longest pass in Super Seven history.

After falling behind early in the first quarter, 13-0, the Patriots found success through the air as quarterback Graderius Brown passed for 292 yards and four touchdowns. Kevin Green was the leading receiver with 207 yards.

Early in the game, the Patriots would find themselves in the red zone three times where they came away without points.

Behind 19-0, the Patriots got on the board with a 57-yard drive that saw Brown complete four of five passes, finishing with a 2-yard pass to Joshua Williams, cutting the lead to 19-6.

With 2:26 left to go in the first half, Mars Hill began passing and went four of four, to score again, making the halftime score, 26-6.

On Lindens second possession of the second half, Mars Hill picked off a pass and returned it for another score, increasing the Panthers’ lead to 32-6.

Linden would score on the following possession, going 75 yards and finishing with a 10-yard pass from Brown to Green, cutting the lead to 32-12.

But, Mars Hill answered once again, driving 84 yards to go back up, 39-12, with about a minute and a half in the third quarter. 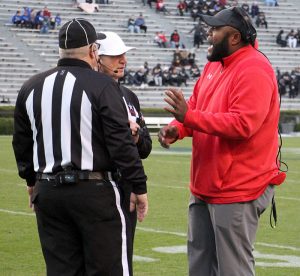 After the kickoff, Linden had a quick strike as Brown hit Green once again for an 85-yard touchdown, which is the second longest pass in Super Seven history. The big play made the score 39-18.

The Mars Hill running game continued to roll into the fourth quarter and the Panthers once again increased its lead, this time with a 36-yard pass play, making the score 46-18.

Linden would follow with a long drive that went 65 yards and ended with Brown hitting Green again for a 10-yard touchdown. A two-point conversion made the score 46-26 with only 4:59 to go.

The Patriots end a historic season that saw them go 13-1, finish as region champions and the 1A State Runner-Ups.