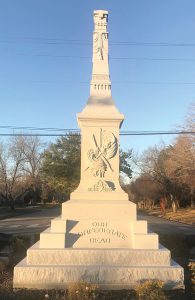 Thursday erecting the new statue on the downtown square. The statue underwent repairs after it was damaged by a police vehicle in 2016. The top now consists of an obelisk, replacing a Confederate soldier, which was also damaged, that the Demopolis City Council opted by a vote in 2017 to replace. The statue was originally erected in 1910, made possible through a project of the Daughters of the Confederacy.

(This picture originally appeared in the Wednesday, December 5 issue of the Demopolis Times.)