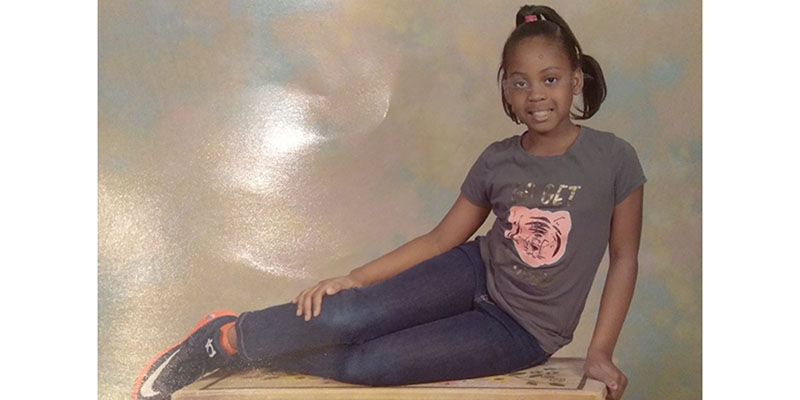 McKenzie Adams committed suicide in December 2018 and her family has filed a lawsuit against Demopolis school officials.

A family is mourning the loss of a 9-year-old girl who apparently committed suicide after school on Monday, Dec. 3. The family says the young girl was the target of bullying at school.

McKenzie Adams was a fourth grader at U.S. Jones Elementary School and was described by family members as being fun-loving and caring and dreamed of one day attending the University of Alabama.

“She was a lot of fun to be around, loved to play, very smart, and was respectful to adults. She loved Alabama football. She and my son, who were the same age, would talk about going to Alabama together some day. She wanted to be a scientist or mathematician,” said Eddwina Harris, McKenzie’s aunt.

Those dreams of a bright future came to an end when officers with the Linden Police Department responded to a home where McKenzie was found unresponsive. Attempts to resuscitate her were unsuccessful.

According to Adams, McKenzie had been the target of bullying at school and that the family had discussed it with school officials through phone calls and face-to-face meetings.

“The problems had been going on all year. (School officials) assured us they would make sure she is safe,” Adams said.

The bullying, Adams said, carried over from the previous school year and included name-calling and notes, at least one of which stating she ‘should kill herself.’ Adams added that multiple students were involved in the bullying of McKenzie.

While Adams says that bullying at U.S. Jones played a role in McKenzie’s death, local school officials said Tuesday afternoon that an investigation finds no such evidence.

“The Demopolis School System has concluded its internal investigation into the allegations that bullying led to the death of one of its students last week. There have been no findings of any reports of bullying by either the student or [her] family. These findings are consistent with the results of the investigation by the Linden Police Department at this time. The investigation by the Linden Police Department is still pending. All further results will be disseminated as they become available,” read a statement issued by the school system Tuesday.

Attempts to contact the Linden Police Department for comment on its investigation were unsuccessful Tuesday afternoon, but school officials said its statement was read and approved by the LPD.

“The police have spoken to students, teachers and administrators and they have found no reports of bullying at this time,” said Alex Braswell, attorney for the Demopolis City School System.

Demopolis City Schools addresses bullying in its Code of Conduct, which officials said is very similar to other school systems across the state.

“Anytime the system receives a bullying complaint the incident is investigated and, if warranted, discipline is given pursuant to the code of conduct,” Braswell said.

Braswell stated that no reports of bullying from the student, nor her family, have been found at U.S. Jones or Westside elementary schools.

McKenzie had attended Demopolis schools throughout her childhood, with the exception of one semester spent in the Linden School System, according to Adams.

Adams said the family is creating the McKenzie Foundation to raise awareness of bullying. She said they plan to work with the family of Maddie Whittsett, another 9-year-old, who committed suicide in the Birmingham area in November. She said the goal of the foundation would be to promote anti-bullying and to help both the bullied and those doing the bullying.

“We have to start identifying the problem and that includes pointing out the bullies so that they, and their families, can get help in dealing with it,” Adams said.

Following McKenzie’s death, the school system brought in counselors and pastors to help students and teachers.

A funeral service will be held for McKenzie on Saturday, Dec. 15, beginning at 11 a.m., in the U.S. Jones Elementary School gymnasium. Among those surviving McKenzie are her mother, Jasmine Adams, and her grandparents, Edward and Janice Adams, all of Linden.