The Marengo County Commission recognizes the Linden Patriots on a successful football season.

Representatives from Senator Doug Jones’ Mobile office announced to the Marengo County Commission that Selma will be the location of a new satellite office for the senator during the Dec. 11 meeting.

The office will be one of six regional and satellite offices representing Jones. Regional Director Al Stokes said they are currently in the process of interviewing for an office coordinator and that they hope to be operating within the next 30-45 days.

“The Black Belt is a pivotal area and [Jones] didn’t feel as though he could give adequate representation to this area without there being a footprint,” Regional Director Al Stokes said. 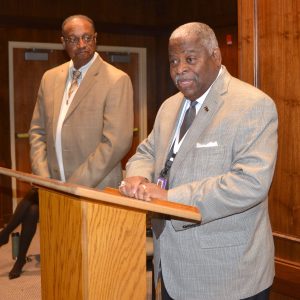 Stokes and Field Representative Donald Dees also have been meeting with government leaders in the counties they represent and encouraged the commission to reach out to the office for any help they may need.

When Commissioner Freddie Armstead reminded the two representatives to speak to Jones about any possible support for Bryan W. Whitfield Memorial Hospital, Stokes assured him that rural healthcare is “at the highest of the senator’s priority list.”

“We have times that attorneys are fumbling with papers. We have times that people come in for cases and they leave not even realizing that they were just in court because of the informal setting of being in the office and not an actual courtroom,” she said.

Hall would use the chamber for two to three days a week for no longer than few hours a day. She said she has looked at other possible locations, but due to scheduling conflicts and other issues she found the commission chambers to be the best option.

Hall also said she would need to purchase two tables able to seat two people from her budget to place in the room for the attorneys involved in the hearings.

Commissioners Michael Thompson and Armstead both expressed concerns over the room being too crowded with the addition of the tables, and Hall offered to move them out of the way if necessary.

“The people that are using it are your voters and your residents. They’re the ones that come into court,” County Attorney Woody Dinning said in support of Hall using the space for hearings.

Commissioner Jason Windham also said “The whole place belongs to the tax payers.” He suggested they consider different table options to address the concerns of space and modifications to the room.

The commission ultimately agreed to continue discussing options for Hall to conduct her hearings, but no further action was taken at the time.

• Sarah Lockett asked that her driveway be repaired after she said a road work crew damaged it while repairing portions of County Road 6.

• Commissioner Terry Hinton presented a plaque to Linden High School Patriots football coaches and players for competing in the AHSAA Super Seven 1A State Championship Game. Aside from the loss of the championship, the Patriots were undefeated this season.

• entering executive session on the basis of good name in character.

• approving the 2019 holiday schedule for employees.

• voting for a resolution to rescind an act originally introduced in 1978, and then renewed in 1995, which bases the salaries for county deputies on the salaries of state troopers. It must also be approved by the State Legislature before it is rescinded.

(This article originally appeared in the Wednesday, December 19 issue of the Demopolis Times.)