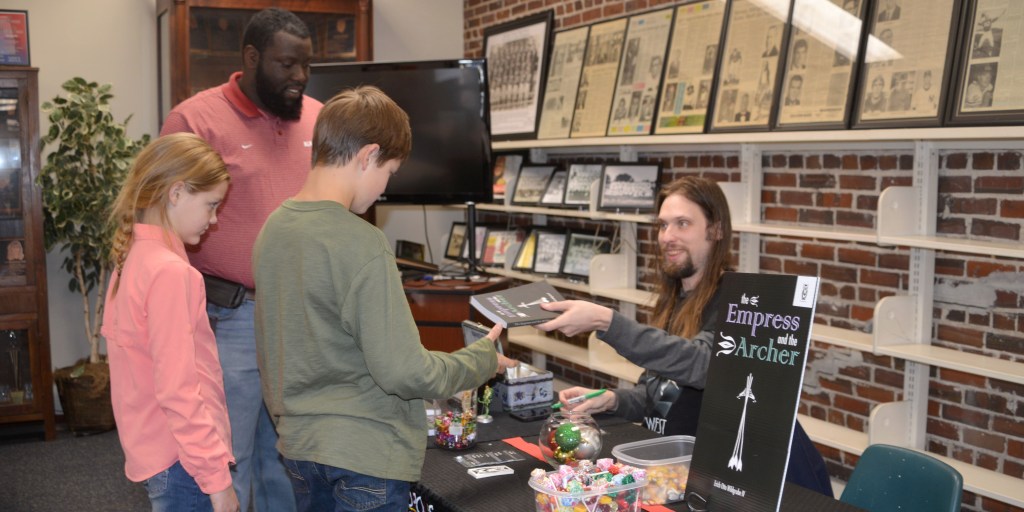 Author Erich Otto Wildgrube autographs copies of his debut novel “The Empress and the Archer” at the Demopolis Public Library on Dec. 6.

Tuscaloosa-native Erich Otto Wildgrube IV read passages from his debut novel “The Empress and the Archer” and signed copies at the Demopolis Public Library on Dec. 6.

The fantasy novel tells the story of Empress Leeta Shepard as she searches for a hero prophesied to save her land from destruction and Alabama teenager Henry Ian Daniels as he navigates his life in our world.

Wildgrube wrote his book over the course of a year, part of which was during National Novel Writing Month (NaNoWriMo), which is a national challenge to authors to write 50,000 words throughout November. He proceeded to edit it for another six to eight months.

Wildgrube found inspiration for the novel in a dream, which he later turned into the prologue. The prologue was the first thing he wrote of the book.

“It was probably late September of 2016, I had a dream of an eagle flying out over this forest and into the flames,” he said.

He is part of a writing club based out of Tuscaloosa bookstore Ernest and Hadley Booksellers, the owners of which also operate independent publisher Borgo Publishing. Wildgrube said the owners approached him about publishing his book. As with most small, independent publishers, Wildgrube needed to raise $1,500 to get his book produced and pay for certain services provided by Borgo Publishing. He raised $1,100 of that through Kickstarter.

Wildgrube is currently editing his second book, which has a projected publication date of Summer 2019, and has begun writing his fourth as part of this year’s NaNoWriMo. According to Wildgrube, fans of his book have much to look forward to.

“I’ve got nine books plotted out in the series right now, but I’m sure after that there will be more to do.”

Wildgrube’s third installment of the series will be a collection of five to seven short stories that will flesh out the world of the book. Wildgrube estimates that it will be out Summer 2020 and hopes to publish one book per year.

“The Empress and the Archer” is available print on demand online at Amazon, Barnes & Noble, and Books-A-Million for $12.50. Signed copies are also available at Ernest and Hadley Booksellers.

(This article originally appeared in the Wednesday, December 26 issue of the Demopolis Times.)