Richard “Rick” Shannon Manley Sr. passed away on Jan. 5, 2019 after a long battle with Alzheimer’s.  Born in Birmingham, Alabama on Nov. 23, 1932, he was adopted shortly thereafter by Dr. Richard S. Manley and his wife Alice Hughes Manley of Epes, Alabama. 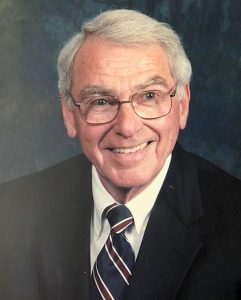 Manley served his country as a member of the Marine Corps during the Korean Conflict, retiring after more than 25 years as a Colonel in the Marine Corps Reserve. After Korea, he attended the University of Alabama Law School and shortly after graduation, established his practice in Demopolis. He served 20 years as a member of the Alabama State Bar Board of Bar Commissioners from the 17th Circuit, and as the Chair of one of its Disciplinary Panels for a majority of that time. His legal career spanned more than 50 years and included serving as the Demopolis City Attorney for more than 20 years. His illness forced his retirement from the profession in 2011, but his firm of Manley, Traeger, Perry, Stapp and Compton continues his professional legacy within the west Alabama community.

Manley’s public service included time as the chairman of the school board, was active in Jaycees and in Rotary, and served in leadership roles at the First United Methodist Church. He served the people of West Alabama as both a Senator and a Representative as a member of the Alabama State Legislature for more than 25 years. Rick served as chairman of both the House and Senate Judiciary committees during his tenure, and was also elected as Speaker Pro Tem of the House. He was recognized for his keen mind and principled leadership through his selection on more than one occasion as “the most effective legislator” by his peers and the media.

Manley also served in leadership roles within the Alabama Law Institute and was one of the original members of the Tennessee-Tombigbee Waterway Board.

A Memorial Service will be held at the First United Methodist Church of Demopolis on Saturday, Jan. 12 at 11 a.m. Family visitation will be from 9:30 until 10:45 a.m. prior to the service. In lieu of flowers, the family suggests memorial donations be made to The SALT Program, First United Methodist Church of Demopolis, 200 East Decatur Street, Demopolis, Alabama 36732 or to the Richard S. Manley Servicemen & Veterans Fund at The University of Alabama School of Law, Box 870382, Tuscaloosa, Alabama 35487.