The Demopolis Tigers faced off against Central Tuscaloosa High School Friday night with the boys securing their eleventh win of the season while the girls took their fifteenth loss. 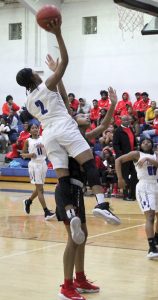 Aniya Johnson looks for a basket as she flys over a Central Tuscaloosa defender.

The girls struggled through the first period with a late score from Aniya Johnson to end the first period, 20-2. The Tigers scored three more baskets in the second period from Shacorie Cockrell, Johnson, and Jakara Taylor to end the half, trailing 37-8. The girls got the first basket of the third period from Samia Jackson followed by a basket from Johnson, a three-pointer from Cockrell, a bucket from Amiricale Jones, who ended the third with another basket leading to a 49-22 score after three periods. The final period saw another three-pointer from Cockrell and the Lady Tigers’ last score from Jones led to a final score of 65-27.

Cockrell and Johnson led the scoring for DHS, each having 8 points, followed by Jones with six points and two points from Jackson.

The boys won a close game against Tuscaloosa Central, 55-50. 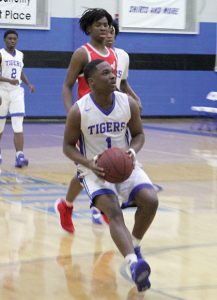 Keyjun Gracie sets up for a shot against Central Tuscaloosa.

The second period started with three scores from Central Tuscaloosa and A. Pruitt scoring to maintain the lead for the Tigers; however, after three more buckets from Tuscaloosa Central, the Tigers lost the lead, but kept it close with points from Womack and Maurice Jones to end the half trailing, 26-21.

The Tigers took full control in the final period, led by Stevenson with 10 points, three points from Womack, and two from Spencer.