The Demopolis boys’ and girls’ varsity teams each won region games against Bibb County on Friday to bring the boys their second area win and their thirteenth overall win while the girls gain their first area win and fifth overall win.

The girls got off to a fast start against Bibb County on their way to a 42-34 victory. 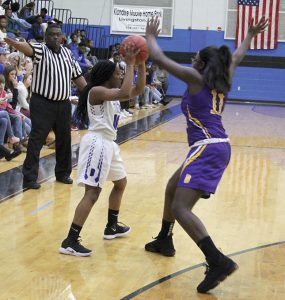 Keandria Williams looks to move the ball to a teammate against a Bibb County defender.

Aniya Johnson scored eight points and Shacorie Cockrell scored a three-pointer in the first period to get the Lady Tigers off to an 11-4 lead.

The second period started with a basket from Abreuna Jones and that was followed by two more scores from Johnson. Jones scored the final basket of the half to give the Lady Tigers a 19-9 halftime lead.

Jones started the Lady Tigers off in the third period with four points and that was followed by another three-pointer from Cockrell and three free throw points by Johnson to take a 29-19 lead over Bibb County.

The Lady Tigers got off to a slow start in the final period until Johnson scored a basket and two free throw points that were backed up with a three-pointer from Ja’kara Taylor and a basket from Samia Jackson.

The game ended with three free throw points from Johnson, leading to the Lady Tigers’ 42-34 victory.

The boys played a very close game on Friday against Bibb County, winning 58-45. 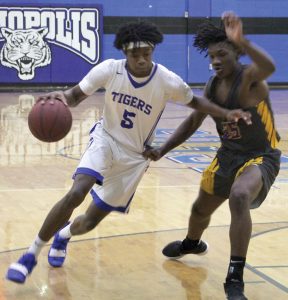 Michael Spencer attempts to elude a Choctaw defender as he drives toward the hoop.

The third period began with a three-pointer from Gracie to take the lead, but Bibb County responded with five more points. The Tigers took the lead with a shot from Gracie, followed by a basket and free throw by Bennett to increase the lead.

Spencer hit a free throw and another basket and additional points from Norvie Womand and Allen Pruitt gave the Tigers a 38-35 edge going into the final period.

The Tigers finished the game strong with buckets by Gracie and Spencer and those were followed by a dunk from Bennett. Wallace contributed four more points down the stretch, as did Spencer and Gracie. Bennett would also get a second dunk, making the final score 58-45.

Spencer led the Tigers in points with 15, followed close by Wallace with 14, while Gracie added 11 and Bennett finished with nine.