Rosenbush was the longtime owner of the Rosenbush Furniture Company, which was operated by his family from 1895 until 2002, which, at the time, made it the oldest family-owned furniture store in the state, having been in business for 108 years. 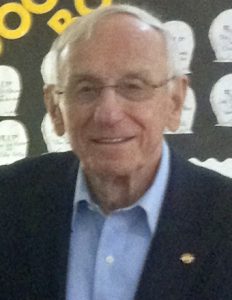 Bertram “Bert” Julius Rosenbush Jr. has passed away at the age of 89.

Bert Rosenbush is widely recognized as being the last of the Jewish families that once made Demopolis home. His grandparents, Julius and Essie Baum Rosenbush, settled in Demopolis in 1894. Bert was born to Bertram Julius and Miriam Stein Rosenbush on Nov. 2, 1929. He would graduate from Demopolis High School and go on to attend Marion Military Institute and the University of Alabama before entering the family’s furniture business.

As a local merchant, Rosenbush had a reputation for helping those who needed it the most.

“He would give people a chance. If they didn’t have any credit he would still work with them and help them to get what they needed,” said T.M. Culpepper, a lifelong friend to Rosenbush and owner of Culpepper Electric.

Upon retiring from the furniture business in 2002, Bert and his wife of 47 years, Mary Louise Bell Rosenbush, donated the three-story downtown building that housed his store, as well as an adjoining warehouse, to the City of Demopolis. Portions of that building are used today to house the Marengo County History and Archive Museum. The building, which is listed on the National Register of Historic Buildings, is considered the largest gift ever presented to the City of Demopolis, and is still named the “Rosenbush Building.”

“He was always looking for a way to help somebody,” said Tom Boggs, a longtime friend and attorney to the Rosenbush family. “He was most generous with the wealth he had.”

Bert Rosenbush represented a once-thriving Jewish community in Demopolis, which was estimated to consist of about 200 people at the turn of the century. The B’nai Jeshurun congregation was established in 1858, which made it among the oldest Jewish congregations in the state. But, younger Jews began to move away in 1970s and the B’Nai Jeshurun synagogue was closed in the late 1990s and the building donated to Trinity Episcopal Church.

Along with donating the building that housed his family’s furniture business for so many years, Rosenbush presented a Holocaust Monument for the Demopolis Jewish Cemetery on Holocaust Remembrance Day in 2009. Graveside services for Rosenbush were held at that cemetery, officially named B’nai Jeshum, on Saturday, Jan. 12.

“All the Jewish people left and he did realize that he was the last still living in Marengo County,” Culpepper said. “It became very important to him to salvage what he could from the synagogue, sending the Torah to a museum … he really became responsible for preserving those Jewish items from the synagogue.”

Growing up about a block from one another in Demopolis, Culpepper said Rosenbush was always a good friend.

“We grew up together and he was always a good person and a good friend. I thought a lot of him and I believe a lot of other people around here did too,” Culpepper said.

Rosenbush was a Mason for over 60 years and was a charter member of the Demopolis Country Club, a Shriner and was involved in numerous civic and business organizations.

Bert is survived by his wife of 47 years, Mary Louise Bell Rosenbush.