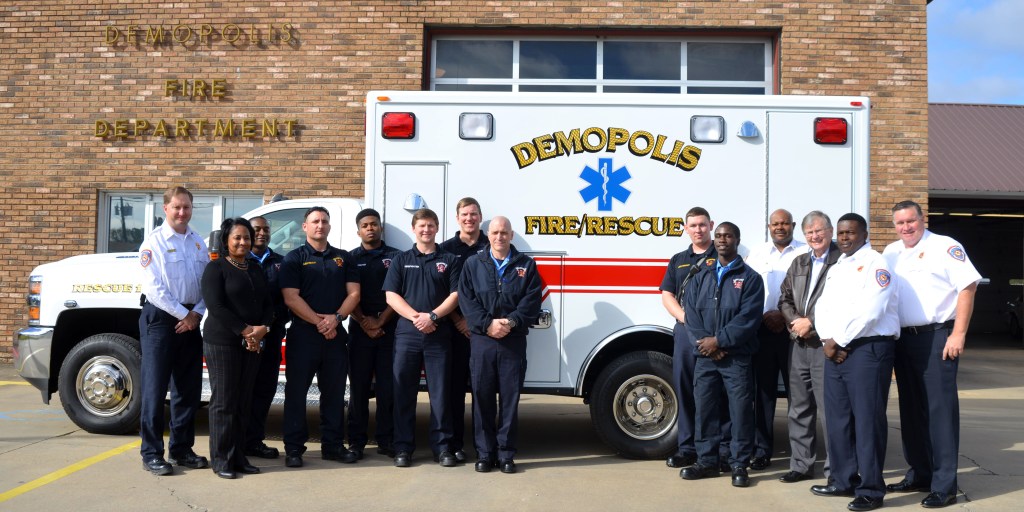 The Demopolis Fire Department became a Basic Life Support department on Jan. 15 with the addition of Rescue One, the department’s first rescue truck.

Mayor John Laney and DFD Deputy Chief Keith Murray both applauded the department’s new ability to perform basic medical services and to transport individuals in an emergency. Rescue One will serve the community in conjunction with Amstar Ambulance Services, which will still function as the main EMS support for the area. 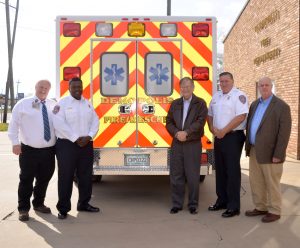 Rescue One will also be present at fires to serve as a rehabilitation center for responding firefighters.

Laney also spoke of the positive economic impact the rescue truck is expected to bring. With the availability of immediate emergency services in Demopolis, he said the city becomes more attractive to prospective industries.

Rescue One is outfitted with iPads for documentation, multiple medical bags in two locations, the latest LifePak heart monitor/defibrillator, a stair chair, an obstetric kit and additional medical supplies.

Murray said that several members of the department currently have EMT certification, with the goal to have “all staff members that are underneath battalion chief level to be EMT-certified” at the end of the year.

According to Laney, the journey to acquiring Rescue One started over two years ago when he first took office.

“I started analyzing statistics, and I found out that somewhere around 10 percent of the calls that this fire department makes are for structure fires. The rest of the calls are pretty much first aid calls,” he said.

Laney soon delegated Rescue One to then-Police Chief Tommie Reese, who collaborated with the fire department and the hospital in order to get a vehicle that best serves the community. It was later approved at a city council meeting in September 2018 for a total cost of $169,726 over a period of five years.

Monthly payments will be made on a five-year lease, and the city council will evaluate Rescue One’s impact at the end of the first year to decide whether or not to continue the lease. They also have the option of selling the rescue truck at any time.

Laney said that Rescue One answering first-aid calls will prevent fire engines from being sent out “which should extend the life of our fire engines.”

While Murray described Rescue One as a “full department effort,” he commended Capt. Alex Morris as project manager, who worked closely with the State EMS Office and the Livingston Fire Department to outfit the rescue truck to meet the needs of the community, as well as Administrative Assistant Shelia Rodgers for handling the financial details of the acquisition.

Elwin Crawford, State EMS Medical Director, said that the “benefit of any type of transport-capable unit to the community pays dividends” in the times when immediate action is needed.

“This unit can go and take care of the community and the visitors to the community and get the patient to the hospital rather than waiting on the scene for a prolonged time while the primary ambulance is out,” he said.

Rescue One is currently available to city calls and will respond as needed.