“It is my honor to pass the gavel to Commissioner Thompson for his leadership in 2019,” Martin said. 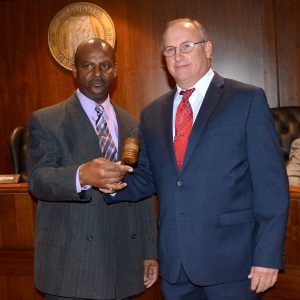 Commissioner Calvin Martin passed the gavel to Commissioner Michael Thompson, who will serve as 2019 chairman.

Thompson also expressed thanks for Martin’s leadership in the last year, telling him “I appreciate you for the year that you [had] in 2018. You did a great job.”

MCEDA recently answered a request for a proposal for a site selection consultant for a company that would bring 65 jobs to the area.

“I was told that it was very comprehensive and the site selection consultant said ‘very thorough and aggressive’ which is all good,” Martin said.

She also assisted an individual who is looking to start his own business by “getting him with the right people in the U.S. Small Business Administration to start up his business.”

Martin also notified the commission that she has visited every plant manager or Human Resources personnel at the plant to discuss any needs or concerns that they may have as part of the Existing Industry Program that she is heading. During those meetings, Martin requested testimonials that may help attract new industries to Marengo County.

“When [plant managers] talk to the other people who are actually doing business here, that can speak volumes more than I could ever say to them,” she said.

The applications for Industrial Park South and Airport Industrial Park in Demopolis to join the Alabama AdvantageSite program, which certifies that a site is thoroughly-prepared for new industries to aid in recruitment, have been submitted to the Economic Development Partnership of Alabama. Martin also notified the commission that the county only needs two more supporting employers in the area to be a certified ACT Ready to Work Community.

She has also been busy touring the county, meeting with various partners of MCEDA, applying for grants to improve the Business Development Center building, planning a mayor’s luncheon and preparing a long list of conferences that she will be attending in 2019.

• acknowledging approval of an ADECA Edward Byrne Memorial Justice Assistance Grant for $197,500 to benefit the regional drug task force that is housed in the Marengo County Courthouse and operates in Marengo, Greene, Sumter, Bibb, Dallas, Hale, Perry and Wilcox counties.

• acknowledging approval of a state Energy Assistance Grant for $15,000 to install new LED lighting at the courthouse. Commissioner Martin made a motion later in the meeting after an executive session to bid out the labor to replace the lights in the courthouse. Bids will be opened at the Feb. meeting.

• entering executive session on the basis of general representation of character.

• Following executive session, Commissioner Hinton made a motion for Cougar Lane to become a county road upon all criteria being met.

• On Jan. 8 Probate Judge Laurie Hall and Circuit Clerk Kenny Freeman were sworn to their next term in office. Hall was sworn in by County Attorney Woody Dinning Jr. and Freeman was sworn in by Hall.