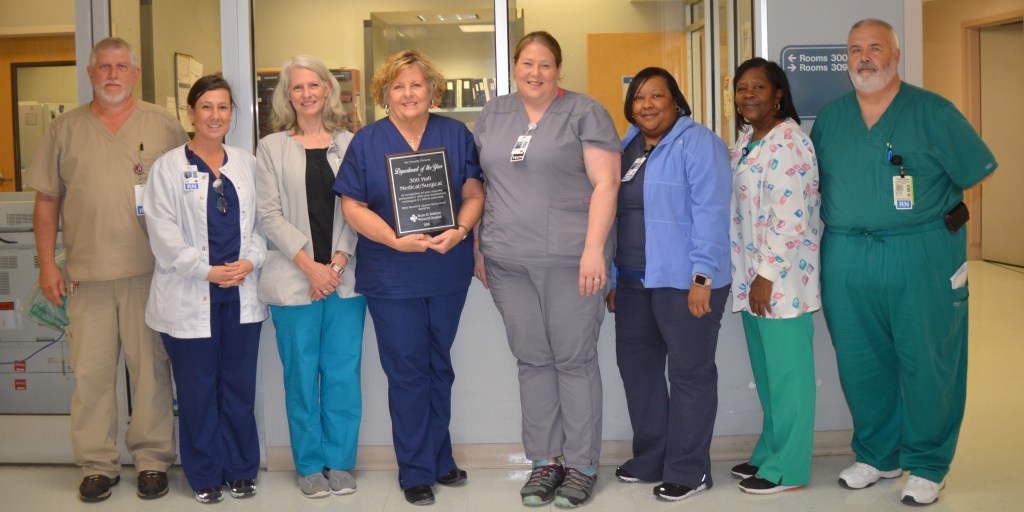 Bryan W. Whitfield Memorial Hospital staff honored many team members and healthcare providers at the Employee Christmas Party at the end of December. The celebrated employees included Department of the Year Hall 300, also known as the Medical/Surgery Unit, Employee of the Year Betty Hambright and longtime BWWMH doctor, Judy Travis.

Hall 300 has anywhere from four to seven nurses on any given shift, according to Terry Elmore, nurse manager for the Medical/Surgery Unit along with the Medical/Intensive Care Unit, but “at least 60” nurses and nurse technicians on staff total. They cover just about every patient imaginable, from pediatrics to geriatric.

“In a nutshell, we take care of everything,” Elmore said.

“It’s like a great, big family. We just take care of everybody. The best thing about it is seeing them get well and be able to go home,” Elmore said of their patients.

When explaining what led to Hall 300 being honored, BWWMH CEO Doug Brewer mentioned nurse Christy Sincroft earning a Polished Stone, an award given to exemplary healthcare providers, as another contributing factor. 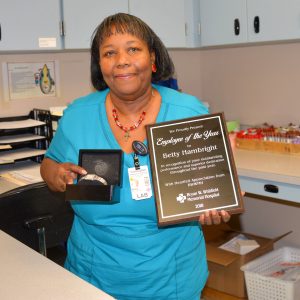 BWWMH recognizes Betty Hambright as the 2018 Employee of the Year.

Employee of the Year Betty Hambright also builds relationships with patients at the hospital as part of her 15-year career as a phlebotomist. Hambright’s job largely entails drawing blood samples and keeping the lab in order. She said she feels her job is important because it could lead to a long-awaited diagnosis.

“Blood can tell you something you can’t identify yourself,” she said.

Hambright, being a people person, enjoys forging relationships with the patients. Some patients also take to her quickly as Hambright recalled a patient who met her once and greeted her with a friendly hug upon seeing her again.

“We’re here for the patient, but sometimes the patient is here for us,” she said, remembering how much it brightened up her day.

As much as she loves the patients, Hambright love her coworkers in the lab more, calling them a “family” and the reason that she has had a fulfilling 15-year career at the hospital.

Hambright’s supervisor Debbie Green, Administrative Director of Laboratory Services, said her ability to put people at ease is one of her biggest strengths. “She really genuinely cares about the people she draws blood from.”

Hambright was named Employee of the Month in September and was nominated for the Employee of the Year by the hospital’s Employee Relations Committee. She was reviewed by senior staff members, including CEO Doug Brewer, before being named.

“I don’t care how bad you feel or how bad your day is, you’re going to be cheered up when you get through coming into contact with her,” Brewer said. 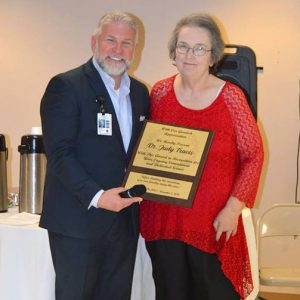 Dr. Judy Travis was honored with a plaque to commemorate her treating patients at BWWMH for over 30 years. Travis has recently decided to stay in clinic while admitting her patients to Bryan Whitfield’s hospitalist program. She is pictured with CEO Doug Brewer.

Dr. Judy Travis was also celebrated at the holiday party for over 30 years of treating patients at BWWMH. Travis came to the hospital immediately after completing medical school and, according to Brewer, has admitted thousands of patients to the hospital.

“When you talk about the body of work that she’s done for this community, it’s really unbelievable,” Brewer said.

Travis, while still on staff at the hospital, will mostly stay in clinic for the rest of her career, with most of her patients being admitted to the new hospitalist program at BWWMH, according to Brewer.

He also said that Travis will remain a on the Board of Directors for the hospital and will still be a “key part of the hospital” moving forward.