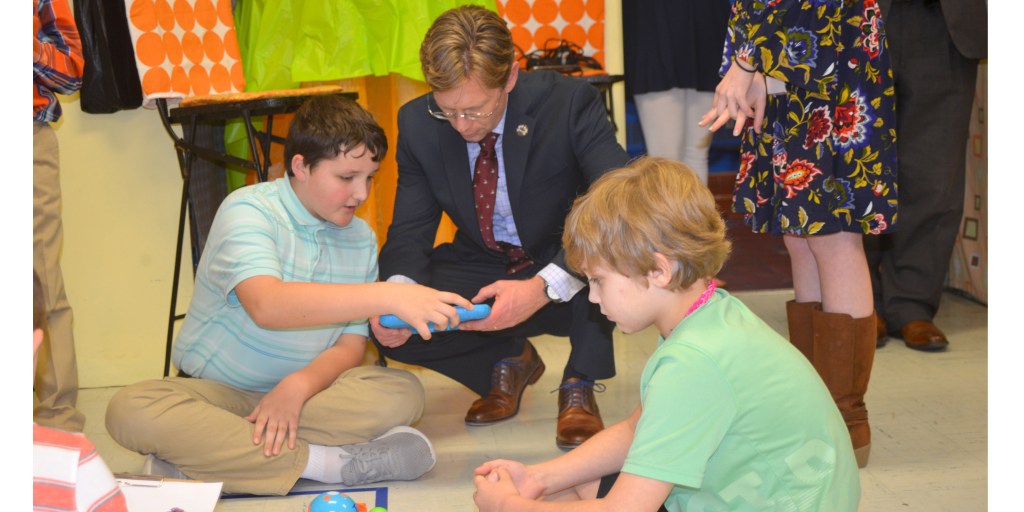 State Superintendent Eric Mackey toured the entire school system on Friday and participated in lessons from teachers and students, such as a robotics demonstration at U.S. Jones Elementary School.

“We are blown away by the things we saw today,” Mackey said, referring to himself and his Chief of Staff Jeff Langham, who also participated in the tours.

The tours were student-led and showcased lessons and demonstrations taking advantage of new advancements, such as STEAM Lab 212 and drones. DCSS Superintendent Kyle Kallhoff said he let the principals take the lead in what Mackey experienced at each school.

“We talked about the itinerary and where we would go, but I told them ‘When we get there, it’s yours. Show us what you want us to see’.”

The tour began at the high school where the Mac Lab, broadcast program Tiger TV, the library’s Maker Space and a Pre-AP Biology class were featured, followed by the middle school where a joint science and math lesson at Lab 212 involving the solar system and a debate class were the highlights.

Mackey had the opportunity to learn about the Demopolis City Schools Foundation during lunch before heading to Westside Elementary School, where a coding lesson featuring Legos and an art class were shown to the state superintendent.

The final tour was at U.S. Jones Elementary School, where students demonstrated their latest lesson with drones and robots. Mackey also gave a short interview for the school’s broadcasting club.

“I’m happy that Dr. Langham and Dr. Mackey came. We do so many great things in Demopolis.It’s not often we get visitors from the state department of education,” Kallhoff said.

Mackey said that, during tours of school systems, he looks for classrooms where students are engaged, teachers who are enthusiastic about their jobs and well-kept facilities.

“I can clearly and honestly say that every school we went in today we saw that over and over again … It’s truly a great school system,” he said.

The visit is part of a larger state-wide tour by the state superintendent, and he said that Demopolis was a stop for several reasons. Mackey said he felt that Kallhoff is “truly one of the most impressive superintendents in the state,” and he has had plans to tour Lab 212 since its grand opening in September. He also wanted to bring attention to DCSS by sharing details of his visit through social media.