Her week began Jan. 11 when she arrived at the home of Drew and Amy Johnson who are one of the program’s host families.  Her roommates for the week will be the Dale County and Dallas County Distinguished Young Women Samantha Adams and Ellie Adams. 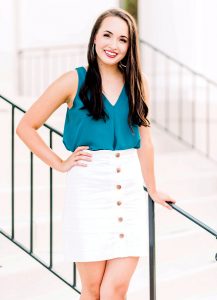 SueEllen Broussard, a student at Southern Academy, is participating in the 2019 Distinguished Young Women of Alabama program as a representative of Marengo County.

Broussard currently attends Southern Academy and she is the daughter of Marty and Jaky Broussard of Faunsdale.

She is active in many activities at her school including serving as the Student Government Association (SGA) President, Yearbook Editor, Homecoming Queen and plays on the varsity tennis team.

High school seniors from across Alabama are in Montgomery for the program.

While at the program, the girls visited various groups and community venues all while preparing for the program.  Participants will compete for $41,000 in cash scholarships and over $2 million in college-granted scholarships, and the opportunity to represent the state as the Distinguished Young Woman of Alabama.

The program was founded in 1958 in Mobile and is considered the largest and oldest national scholarship program for high school girls.  The program has impacted the lives of over 730,000 participants, and last year, the program provided more than $367 million in cash and college scholarship opportunities to program participants at the local, state and national level.

The program was once known as America’s Junior Miss but was changed in June 2010.