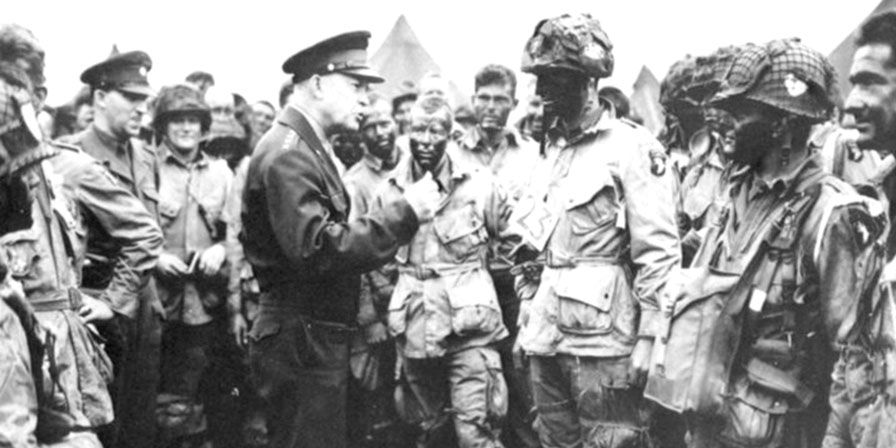 This is another column where you, Dear Readers, can once again fill in spaces from your memory bank and your treasured portraits of patriots, places and events as you read.

I am running a photo that we’ve used before, but it says so much. June 6, 1944 as General Dwight D. Eisenhower, Supreme Commander of Allied Forces in Europe, speaks personally with paratroopers from the 82nd and 101st Airborne Divisions on an airfield in England as they prepare to climb into a C47 aircraft and jump into German held and fortified Normandy in the dead of night. This picture has been meaningful to me since I was a boy.

That airborne operation, to me, was among the great events of Americanism, and I’ve always felt a little cheated because I was only four at that time, and could not parachute out with those wonderful American boys and men in baggy pants as they gave of themselves to preserve, not only American freedom, but world freedom.

As we all tire of hatred, division and unrest in this nation, we have to believe that Americanism will once more win the day as it has in days gone bye, including the failure of many Americans to remember just what the Stars and Stripes really stands for in our daily lives until some horrific act, such as 9-11, brings us back to reality.

Certainly, we have so many diverse beliefs, because we are a diverse people making up the patchwork quilt of America. The Boggs family came to these shores from Scotland, and the Coopers from England. My Scottish clansmen were bitter enemies of the English, yet Tom Boggs Sr., my daddy, met Agnes Wilmothe Cooper, my ma, and oh, how those two loved each other, and believed in their family and their America.

The American Legion is the largest Veterans organization in the country, and will be 100 years old soon. I think back to the 50s when I had the opportunity to compete in the Legion sponsored Oratorical contest that was first started in 1938, and I am pleased to be involved in sponsoring sending young high school men to Boys State each year on behalf of the Legion. The American Legion, to me, speaks of and stands for Americanism, down to throwing out the first pitch in an American Legion baseball game, America’s sport.

You know another great thing about Americanism? We can laugh at ourselves, and go on with our lives, disagreeing with our neighbors, our congressman and even our president, but still agreeing that we have to cherish and preserve the freedom to disagree and yet still be Americans, subject to and loving that Red, White and Blue, no matter what.

The last issue of The American Legion Magazine, as always on the last page, printed “Parting Shots.” These are usually jokes or cartoons that really are still funny like the ones I remember in the Saturday Evening Post in the ‘50s. The cartoon of the month pretty well sums up how we can be different and still continue the march. A grandfather, looking a little bewildered, was sitting on a park bench where his grandson sat holding his cell phone. The youngster looked up at Pap, and explained, “I don’t know cursive, and you don’t know emoji. I’d say that makes us even.”

How can we better close this column than merely saying, God bless America and Americanism.