Each unit of blood, which is equal to slightly less than a pint, can be separated into the three life-saving components of red blood cells, platelets and plasma, according to Vitalant Representative Beverly Clark. 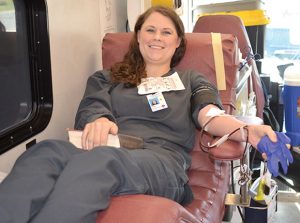 Kate Crawford, a counselor at Bryan W. Whitfield Memorial Hospital and Director of Tombigbee Outreach, was one of the 37 employees who signed up to become a blood donor on Jan. 25. Of the 37, 33 were able to donate.

“When one person gives one unit of blood, you don’t realize you actually impact three lives. These 33 units are going to impact 99 lives,” Clark said.

Five technicians collected blood from 10 a.m. to 4 p.m. Initially, only three technicians were scheduled to work the blood drive, but the unexpected turnout required an increase in staff. Of the 37 that originally made the commitment to become donors, 33 were able to do so.

According to Clark, 16 of the 33 units were type O positive and three were type O negative, which are two widely used and nearly universal blood types.

“Our hospitals’ doors cannot stay open without blood. Blood is vital to life,” she said.

Donor Kate Crawford, a counselor at BWWMH, said, “It’s the right thing to do to help others, give back to people if you can.”

The entire Demopolis community can donate blood on Tuesday, Feb. 5 at the Demopolis City Civic Center from 9:30 a.m. to 5:30 p.m. The blood drive is hosted by the BWWMH Auxiliary, and appointments can be made by calling Carol Bell at 287-3000.

Vitalant is formerly known as United Blood Services, as well as 126 other nationwide blood donation centers that collectively became known as Vitalant in late 2018, and has been serving BWWMH for over 20 years.