The Demopolis Tigers’ got the better of county rival Linden High School  Friday, with both the boys’ and girls’ squads coming away with wins. The boys got their fifteenth win while the girls earned their seventh win. 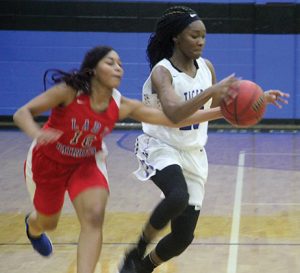 DHS’s Americale Jones attempts to dribble by a Linden defender.

The Lady Tigers began their contest with the Lady Patriots with a scoring frenzy by Samia Jackson starting things off with a basket, followed by points from Shacorie Crockrell and Abreuna Jones, as well as four scored by Aniya Johnson. In all, the Lady Tigers scored 16 points to take a lead over the Linden Patriots to end the first, 16-8.

The second period saw less scoring, but more defense, from both teams. Four points from Johnson and two from Ja’kara Taylor kept the Lady Tigers in the lead over the advancing Patriots with the second period ending, 22-19.

The third period was a lot different from the second as both teams came out of the half scoring fast with Jackson scoring a free-throw point followed by a three-pointer. Brooklyn Phillips also scored a three, and points were added from Tykeshia Howell, four from Johnson, and two more points from Phillips and Jackson to keep the Tigers ahead. 39-35.

Johnson led the Lady Tigers in points by scoring 17 points, with eight from Jackson, six from Howell, and five from Phillips. 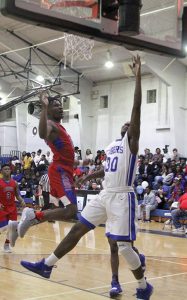 Rashaad Boone goes to the hoop as Linden defends.

The Tigers also got off to a fast start against the Patriots. They got a strong push in the first period with Keyjun Gracie scoring first, followed by two points each from Alan Morrow and Maurice Jones, then Gracie scored 14 more points before the period ended with a shot from Allen Pruitt and another Tiger to give DHS a 25-13 lead over the Patriots.

The second period was a closer match with the Tigers and Linden countering each others’ scores. After getting six points in a row, Norvie Womack scored a three-pointer followed by another basket and three points from Bryan Bennett, and a shot from Joshua Mason to keep the Tigers ahead, 41-30.

The third period began with a three-pointer from Gracie, a dunk and free-throw point from Michael Spencer. Additional baskets gave Demopolis a 56-47 lead at the end of the third.

The Tigers finished the way they started with Shatarius Williams scoring four points, Gracie scoring seven, Womack scoring three baskets, Jones scoring one basket, and both Bennett and Spencer making slam dunks to end the Tigers with a win, 81-67.

Gracie was the top scorer for Demopolis with 28 points, followed by nine points from Womack, and five points from Spencer and Bennett.