A penny for your thoughts

As far back as I can recollect, we were able to send our thoughts from one end of this country to the other via a simple one cent post card through the United States Post Office, and could write down several thoughts, place them in an envelope, and if the pages didn’t exceed one once in weight, place a three cent stamp on that thing, and off it would go from sea to shining sea.

The stamps reflected with the column this week depict a three cent sample issued during World War II, the bottom Martha Washington stamp being a 1 ½  cent stamp, and the one on the right commemorating the 50th anniversary of the founding of the American Legion with a six cent value. The Legion will be 100 years old this year. 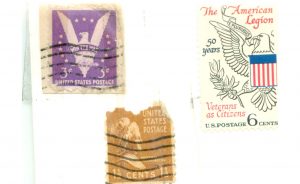 I’ll come back to the years between the forties and 1958, but we do know that the postal rates for one ounce did rise one or two cents at a time over the years, peaking at fifteen cents in 1978, and hitting 49 cents in Jan 2014, but for some reason or another, dropping 2 cents to 47 cents per stamp in 2016, back up to 49 cents in 2017, costing 50 cents in Jan of 2018, and hitting Americans with a 5 cent increase at one time on January 27, 2019, the Sunday that this column is being written. Fifty Five cents per envelope! What in the Sam Hill is going on since Pony Express days of two cents?

I’ve always made use of the Post Office, and especially through the forties and through 1958 when my bunch finished high school, with the only other means of communication during that period being telephone and Western Union. I have a copy of the first Western Union message ever sent to me being congratulations on my birth dated Feb 9, 1940 from my Great Aunt Hazel Cooper, the telephone during that period of time being mostly turning the handle on a wall mounted contraption, and giving the number we wanted when the operator came on the line with “number, please.” If somebody was calling our number over on Boggs Street in Linden, they would ask for 34J. I remember a stuffed giraffe or some such critter either my brother Billy or I had one time, and his name was 34J.

So what will become of First Class letters, Dear Readers? I stocked up on Forever stamps Friday at 50 cents per each, and half a dollar to send one envelope has been tough enough, but fifty five cents! Wow! I’m just thinking about walking to town in the ‘50s flipping a 50-cent piece in the air, which was the cost of a haircut in those days. Don’t know just what a haircut sets fellows back nowadays, since my good wife has been cutting my hair most every weekend for a heap of years.

Well, you get the drift of stuff. At least I’ll get to send this column to the papers through the means of that new fangled internet. I hope the papers still keep percolating along through the mail somehow or ‘nother. Happy reading, Folks.

(This column originally appeared in the Wednesday, January 30 issue of the Demopolis Times.)