Jason Cassity of the Corp of Engineers recently spoke to the Demopolis Rotary Club, sharing details about Foscue Park. 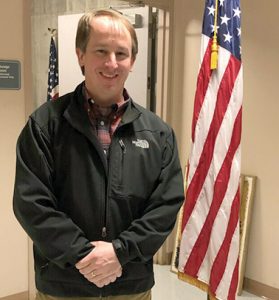 Jason Cassity of the Corps of Engineers recently spoke at a meeting of the Demopolis Rotary Club, sharing information about Foscue Park and other Corps properties.

Foscue Park in Demopolis is one of the parks managed by the Corp of Engineers. Foscue Park boasts around 12,000 campers a year. Campers have visited from 41 states and three Canadian provinces. A lot of locals also like to camp at Foscue Park. Peak season for the park ranges from March 1 through Memorial Day and then Labor Day through Christmas on the River weekend.

The park also has volunteers that help maintain the park, as well as, one volunteer who has created beautiful carvings out of some of the trees. Spillway Falls Park or “Lower Pool,” another Corp of Engineers property, as most locals know it has been renovated in the last few years. At Spillway Falls, there is a beautiful pavilion overlooking the river that can be rented for $45 per day. Family reunions, birthday parties, and weddings have been held at this pavilion.

Corp of Engineers land also boasts opportunities for duck and deer hunting, Cassity said. There are also scenic walking and hiking trails. Cassity encourages the public to visit Foscue and other Corps of Engineer properties.