(This article was written by Carla Davis for the Demopolis Times.)

They have never met and likely never will. But Leah Banks more than willingly poured out herself to help give new life to a child thousands of miles away.

In the past seven months, Banks, a Alabama Power Eutaw Office customer service representative, has donated stem cells twice to a girl suffering from acute lymphocytic leukemia (ALL). Miraculously, the two were connected through Be the Match, a nonprofit organization managed by the National Marrow Donor program. The world’s largest donor registry, Be the Match helps save lives by working to provide transplants for patients suffering from blood cancers and other diseases. 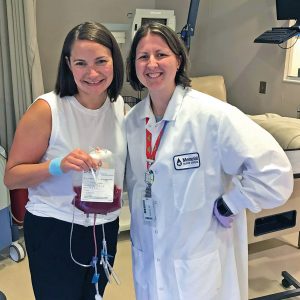 It took 5 and a half hours to collect stem cells for the donation.

For Banks, it all started in 2010 when she learned about the transplant program by visiting a Be the Match booth at Alabama Power Western Division’s Safety Fest. She joined the Be the Match registry on the spot and provided a sample of her DNA through a cheek swab.

“When I signed up, I thought, ‘This sounds like a cool thing, but I will never hear back.’ I was told that you have only a one in 430 chance of being matched with someone,” Banks said.

That’s why when Banks got a text from Be the Match in November 2017, she had nearly forgotten that she had volunteered for the program seven years earlier. The text notified Banks that she was a possible match for an international patient who needed a transplant.

“At first, my heart dropped,” Banks said. “I just didn’t know what I had gotten myself into. But after the shock wore off, I was excited.”

After undergoing a physical and providing blood samples, Banks learned that she indeed was the best match. But she was told little else about the stranger from across the ocean who needed her help. In fact, at the time, Banks didn’t know if she would be called on to donate stem cells or bone marrow – both of which are collected through the program.

Several months later, Banks got a call that the patient was ready for her help. The girl needed a blood stem cell transplant to fight ALL, one of the most common blood cancers affecting children. That meant the stem cells in Banks’ blood would be collected and transplanted into the patient.

Banks made her first donation on April 18 at MedStar Georgetown University Hospital in Washington, D.C. During the week before the trip, she received several daily injections of Filgrastim, a drug that stimulates the production of stem cells and moves them from the bone marrow into the blood stream.

The donation process was painless, Banks said. She was allowed to relax and enjoy movies on her laptop while blood was drawn from her arm via an intravenous line. Her blood was then passed through a separator machine to remove the stem cells before it was returned to her body. 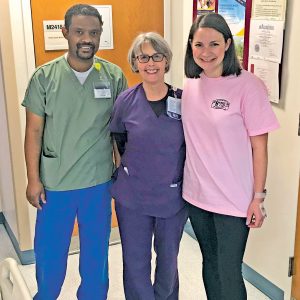 Banks’ stem cells were delivered by courier to the distant transplant center where the patient eagerly waited to receive them.

“I was never scared,” said Banks, noting the process took more than four hours. “I didn’t think about the needles or the injections. It just felt so good to be helping this child. When you think of what that patient is going through, how can you say no?”

Banks said the donation process left her feeling “zapped” for a few days. But overall, it was an “amazing” experience.

“It doesn’t hurt,” said Banks. “Once you’re hooked to the machine, it doesn’t feel weird or painful. You just enjoy your quiet time.”

After a few months, Banks was surprised to receive another call from Be the Match. The child needed her help once again.

This time, Banks donated her stem cells on Sept. 10 at Memorial Blood Center in Minneapolis.

“I am so blessed and lucky to work with selfless individuals like Leah,” said Matthew Shirley, Be the Match work-up specialist who oversees the donation process. “They are willing to help a complete stranger, and in Leah’s case, she did it twice. She was so flexible with her schedule and was willing to do anything for this young girl.”

Banks said commitment to the process from beginning to end is essential and could mean the difference between life and death for the patient.

“You can’t go into this halfheartedly or change your mind once you are committed,” she said. “That person is depending on you. If you quit, they may not make it.”

Donating her stem cells was not enough for Banks. Only 30 percent of patients who need a transplant find a match within their family. That means the vast majority must rely on strangers to help save their life.

Banks has encouraged her family and friends to volunteer for the program. She hosted a Be the Match registry drive at a local festival last summer.

Be the Match makes the process simple, Banks said. The organization schedules all doctor appointments and covers the cost of travel, lodging, food and any other expenses associated with the trip to the donation center.

Since the transplants, Banks has exchanged letters through Be the Match with the girl who received her stem cells. While Be the Match does not allow donors and recipients to share personal details about their lives, the letters gave the two the chance to become more connected.

“Hands down, this is the most rewarding thing I’ve ever done in my life,” said Banks. “It has been very emotional because there’s a lot of pressure. What if it doesn’t work? There’s no guarantee that you will save someone’s life. But you are giving them hope. Knowing that there’s someone out there fighting for her life, and I’m part of that puzzle is truly amazing.”

For more information about the Be the Match donor program, visit bethematch.org/.