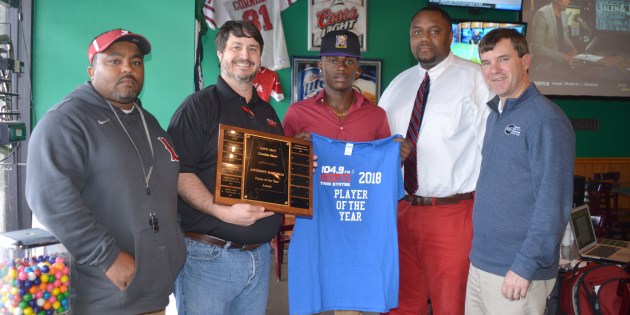 Graderius Brown, center, was recognized by ESPN 104.9 as the Marengo County Player of the Year during a signing day event at Batter Up Sports Grill. Pictured are, from left, LHS Coach Travis Lockett, Sean Parker of 104.9 Radio, Brown, LHS Head Coach Demetrice Jackson, and Rob Pearson. 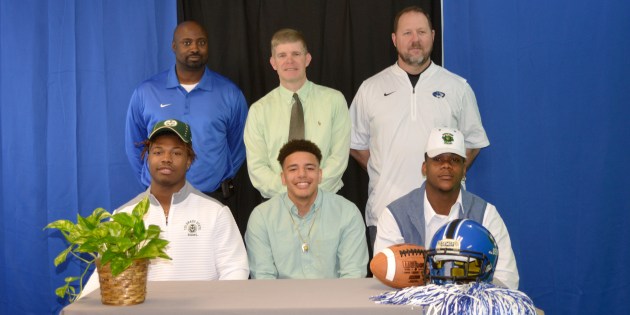 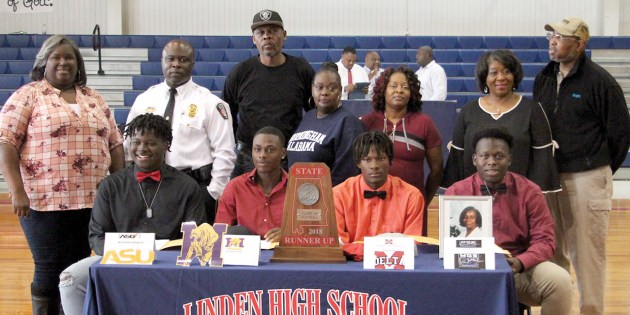 Marengo County student athletes celebrated National Signing Day on Feb. 6 as they signed their letters of intent for as the first step in their college athlete careers.

Three Demopolis High School football players committed to colleges at 9:30 that morning surrounded by support from family, friends and coaches.

Tavian Brown was first in line to sign his letter of intent to play middle linebacker for the Colorado State University Rams.

A football player for 11 years, Brown decided to take his career to Colorado, where he plans to pursue a degree in criminal justice, based on the city and the team’s head coach who Brown believes will make him “a better player on the field and a better man off the field.”

DHS Head Football Coach Brian Seymore said Brown “brings the right kind of attitude, the right kind of work ethic and accountability each and every day that makes the people around him better. He’ll do a tremendous job, and he was a blessing to coach.” Seymore also said he considers Brown to be “one of the most underrated linebackers in the state of Alabama.”

Trey Murdock was the second to sign, with ten family members sharing his big moment. Murdock will be taking his talents to Bayou Prep to play defensive end for the Gators. He said he was drawn to the college because of the he and the college’s Head Coach Ross Akpan established a “great coach-and-player relationship” and because it was overall the best decision for him.  He will be studying physical therapy.

“I’m proud for him to get the opportunity to go to the next level and not just further his academic career but his athletic career, and I think he’ll pay huge dividends for Bayou Prep,” Seymore said.

Grey Tripp finished the morning’s signings when he committed to play for Bayou Prep as a linebacker or safety, a change of pace from his current position of wide receiver.

Tripp said he will be playing for Bayou Prep and studying physical therapy while gearing up for scouts for the next year. He’s been playing football since he was 9-years-old.

“He has a lot of hard work and work ethic about him. He goes about his business each and every day and does it the right way. I think he’ll take that same attitude and same commitment to Bayou Prep,” Seymore said.

In Linden, four student-athletes signed scholarships to play football at the collegiate level.

Robert Alston IV will take his talent to Alabama State University where he will play offensive tackle. “The coaches welcomed me like family and it felt like home there,” Alston said of his decision to attend ASU.

Brown signed with Miles College where he will be a defensive back and return specialist.  “I love their winning history and the coaches were very welcoming. I feel like it will be a good fit for me,” Brown said.

Green will be attending Mississippi Delta Community College where he will play receiver. “Head Coach (Jeff) Tatum was very straight and honest with me and when I visited I really liked the people and campus,” Green said.

Presswood signed to play on the defensive line for Middle Georgia State in Macon. “I liked the atmosphere there and after speaking with the coaches felt like it would be a good fit,” he said.

LHS Head Coach Demetrice Jackson said he is very proud of the four signees and that they have made their mark on Patriot football.

“These four guys mean a lot to our program,” Jackson said. “They are each special guys and I hope as they go off to these other campuses they will continue to make positive impacts and continue to represent LHS proudly.”

As seniors the four were part of a 13-1 season and went to the 1A State Championship game, finishing as runner-ups.

The athletes were in the spotlight once again for ESPN 104.9 Coaches Show Signing Day Special as hosts Sean Parker and Rob Pearson interviewed each one at Batter Up Sports Bar and Grill.

In addition to signing his scholarship to Miles College, Brown was named the Anthony Robinson Player of the Year Award recipient.

Over the course of the season, Brown racked up 80 tackles, 14 tackles for loss, six sacks, three interceptions, two forced fumbles and a fumble recovery. As quarterback for the Patiots, Brown went 119-of 215 for a total of 2,480 passing yards. He threw for 29 touchdowns. Brown had 140 rushes for 1,011 yards and 14 touchdowns. On special teams, he finished with 765 return yards on punts and kickoffs, with five punt returns for touchdowns and two kickoffs returned for touchdowns. In all, Brown accounted for 50 touchdowns on the 2018 season.

Brown said he considers it an honor to be named and thought of it as a sign that he was “outstanding” this year.

“I had a break-out year, and it was good. I want to tell everybody around here to work hard, believe in your team, and you will make it,” Brown said.

(This article originally appeared in the Wednesday, February 13 issue of the Demopolis Times.)