A new display covers a wall in the main hallway of Bryan W. Whitfield Memorial Hospital, honoring the recipients of the Polished Stone award, the highest honor available at the BWWMH.

Shortly after the hospital’s CEO Doug Brewer arrived to the hospital, he introduced a mainstay in his leadership which signifies when a healthcare professional went “above and beyond” their normal duties and likely saved a life in the process. 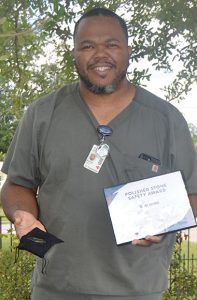 CT Technician Ronnie Abrams, above, and Nurse Christy Sincroft, above left, are the first recipients of the Polished Stone Award at BWWMH. 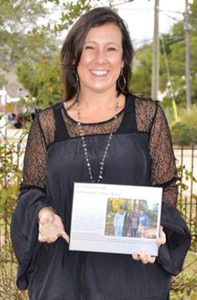 be mindful and to help each other in order to succeed. For the hospital, employees must be engaged with each other and the facility’s processes in patient care in order to catch any mistakes or inaccuracies.

“Hospitals have great processes, but usually when it breaks down its because you have somebody that’s not engaged somewhere along with way,” he said.

Brewer said employee engagement was present in the hospital’s two recipients of the Polished Stone, the first being CT Technician Ronnie Abrams.

Abrams had performed a CT scan for a patient in July 2018 and sent it to a radiologist in Montgomery to be read. As far as the hospital’s procedures were concerned, the reading would be sent directly to the physician and Abrams’s job was done.

However, outside of his assigned duties, Abrams reviewed the readings himself and realized that they were incorrect. He notified the radiologist and the results were reread correctly, resulting in the patient receiving an accurate diagnosis and treatment.

“He clearly cares about what he is doing and is engaged in his work to make sure he is providing safe care,” Brewer said.

Nurse Christy Sincroft was the second recipient for her actions with a patient in late October 2018. Sincroft was regularly helping a patient from the bed to the chair and back when she noticed the patient’s gait was unsteadying. The patient blamed it on a bad knee, but Sincroft was not satisfied.

After discussing her concerns with a doctor, a CT scan was ordered and it was discovered that the patient had actually unknowingly suffered a stroke.

“We have great nurses here with a lot of tenure. Christy is one of those, and she really stands out, and it shows the kind of engagement you get in a community hospital,” Brewer said. “Sometimes safety in a community hospital is easier to obtain than in a large hospital because it is so close to our hearts. It’s our family and friends that we’re taking care of, and it becomes a personal thing.”

Brewer said that for every ten names that have come across his desk thus far for the Polished Stone honor, only one merits enough care to warrant further review.

Because of the nature of the Polished Stone, the more it promotes excellent engagement and safe care, the rarer it will become as it keeps safe patient care at the forefront of all employee’s minds.

“By saying to our employees, there’s nothing better that you can do than be engaged enough to catch a safety issue — and putting it right there as everyone walks in the door to say this is the most important thing we do — it means we’re going to be a safer hospital over the long-term,” Brewer said.

(This article originally appeared in the Wednesday, February 13 issue of the Demopolis Times.)