An editorial published in the Democrat-Reporter, a newspaper based in Linden, calling for the “Ku Klux Klan to ride again” has made state and national headlines and has led some elected officials to publicly call for the publisher and editor’s resignation.
The newspaper’s longtime publisher, Goodloe Sutton, has confirmed to media sources that he wrote an editorial that suggests the Klan should ride on the “Democrats in the Republican Party and 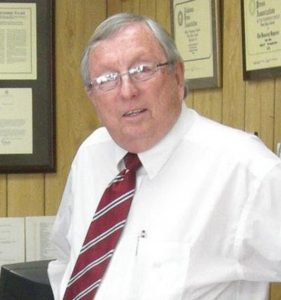 Democrats” who he said “are plotting to raise taxes in Alabama.”

While this is not the first time Sutton has published controversial editorials, some officials say this time he has gone too far.

U.S. Congresswoman Terri Sewell, who represents Alabama’s 7th District, said in a written statement to the Times, that she does not feel the editorial represents the people of Marengo County, but added that it should not be taken lightly.
“For the millions of people of color, especially those in Alabama, who have historically been terrorized by white supremacy, this kind of ‘editorializing’ about lynching is not a joke — it is a threat. These comments are deeply offensive and inappropriate any day, but especially in 2019. Mr. Sutton should apologize and resign,” Sewell said.
U.S. Senator Doug Jones could not be reached for comment Tuesday, but stated on Twitter that the “editorial is absolutely disgusting and he should resign — NOW! I have seen what happens when we stand by while people — especially those with influence — publish racist, hateful views. Words matter. Actions matter. Resign now!”
Linden Mayor Charles Moore said this is not the first time Sutton has gained negative attention for articles or editorials that appear in his newspaper, and that businesses in Linden have already stopped selling his newspaper as backlash for the newspaper’s previous editorial content.
“This is the only way he can sell the newspaper,” Moore said. “It’s not helping Linden, and it sure isn’t helping Marengo County at all.”

Marengo County Commission Chairman Michael Thompson said the editorial was “written in very poor taste and that article in no way represents the Marengo County Commission or the people of Marengo County.”
Marengo County Commissioner Freddie Armstead said Sutton uses “hate not love” to sell newspapers, adding “it is a shame that at this time and day we have to talk about discrimination and the Ku Klux Klan. I think that the people of Marengo County and the state of Alabama have gotten past that.”
Some are hopeful that the editorial will spark a conversation on race and lead to something positive.
“I don’t believe (Sutton’s) sentiment is the same as most people in Marengo County, period. But, the beautiful thing is, he has opened the door to a dialog and that is a healthy thing. It gives us the opportunity to have a conversation about race, but we have to be serious and do it,” said State Rep. A.J. McCampbell, who represents the 71st District.
Marengo County Probate Judge Laurie Hall said it is important for those in the community to remember the positive relationships that have been forged over the years.
“We have a great community. Everyone gets along and we should not allow one person’s views, or other internal or external factors, to change what we have in Marengo County,” Hall said.
Multiple calls by the Times to the Democrat-Reporter office for comment were unanswered Tuesday.
On Tuesday, the Alabama Press Association Board of Directors voted to censure Sutton and suspend the association membership of the Democrat-Reporter. The members have a right under the bylaws to address the question of expulsion of the newspaper at its next membership meeting.
The University of Southern Mississippi’s journalism department also announced it has removed Sutton from its Hall of Fame. Sutton was inducted into the school’s hall of fame in 2007 based on his reporting of corruption that led to multiple awards for him and his late wife, Jean Sutton.
“The School of Communication at the University of Southern Mississippi learned of Mr. Goodloe Sutton’s call for violence and the return of the Ku Klux Klan,” stated a USM press release. “Mr. Sutton’s subsequent rebuttals and attempts at clarification only reaffirm the misguided and dangerous nature of his comments. The School of Communication strongly condemns Mr. Sutton’s remarks as they are antithetical to all that we value as scholars of journalism, the media, and human communication. Our University’s values of social responsibility and citizenship, inclusion and diversity, and integrity and civility are the foundation upon which we have built our School and its programs.”
Members of Auburn University’s Journalism Advisory Council announced they are in the process of revoking a community journalism award presented to Sutton. Jean Sutton also received the award, posthumously, and it will not be revoked.

— This article was updated on Wednesday, Feb. 20 to include a comment from Marengo County Commission Chairman Michael Thompson.