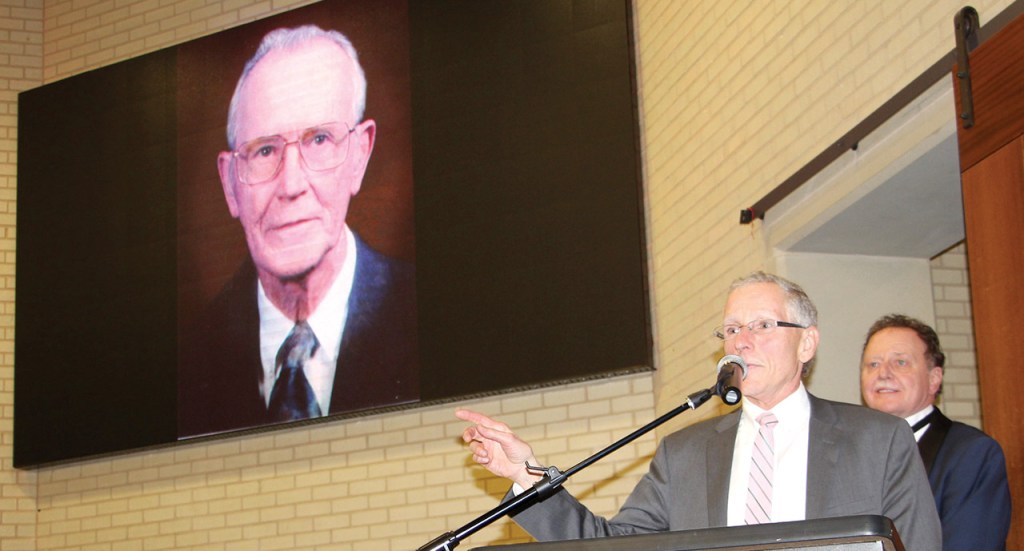 Woody Dinning Jr., with a photo of his father in the background, speaks Friday night as Woody Dinning Sr. was inducted into the Alabama Boxing Hall of Fame.

Woody “Lawyer” Dinning was among those inducted into the Alabama Boxing Hall of Fame as a member of the Class of 2019 during an induction ceremony and fight card Friday evening at the River Market in Tuscaloosa.

Dinning is a founding partner of the Lloyd and Dinning Law Firm in Demopolis, where he practiced law for over 50 years. In addition to his work in the field of law, Dinning had a passion for boxing.

As a young man, Dinning was a member of the University of Alabama boxing team. He was drafted into the Army and served in Europe during World War II. Following the war, he started his law firm.

He returned to the boxing world in the 1970s as a manager, trainer and promoter. He founded the Demopolis Boxing Club for local youth and continued as that club’s leader until his death in the late 1990s.

Dinning’s son, Woody Dinning Jr., was on hand at the ceremony to speak on his father’s induction into the Hall of Fame. He said his father started the Demopolis Boxing Club after being asked by people in the community. “He thought it would last a year or two, but ended up lasting decades,” Dinning Jr. said.

Dinning produced several state and national contenders from the boxing club in Demopolis. He would travel across the region transporting his boxers and equipment.

While Dinning had a passion for the sport, passing what he knew down to others became more about creating successful men, not just  good boxers.

Three of Dinning’s boxing students were among those in attendance Friday night, including Wendell Charleston, Doug Phillips, and Walter Charleston, who worked to re-establish the boxing club after it went dormant for a few years after Dinning’s death.

Dinning passed away ringside in 1998 just after one of his boxers won a bout.

“On April 30, 1998, he took three boys to Jackson, Tennessee. That night I got a call saying dad’s boxer had won and that he fell out in the ring. He wouldn’t have wanted to go out any other way than with one of his boys with their boxing gloves on,” Dinning Jr. said.

Dinning went on to say that his dad would have been very proud, although likely quiet, about his induction into the Hall of Fame.

“We are honored and humbled to be here because it is special to us. I came to learn from observing dad, whether your in the ring or supporting as fans, boxing is one big family, and my family appreciates you allowing us to be part of your family tonight,” he said.

The inductions were conducted between six bouts on the fight card. Masters of Ceremony of the induction were Henry Jones, a ring announcer for HBO, Showtime and USA Network, and ESPN, and Kip Tyner, former TV anchor and news director for WCFT. Skyy Boxing promoted the event.

(This article originally appeared in the Wednesday, February 20 issue of the Demopolis Times.)