In response to a resident’s concerns about the Democrat-Reporter’s controversial editorial written and published by Goodloe Sutton on Feb. 14 that was discussed at the Feb. 19 Linden City Council meeting, Mayor Charles Moore announced that Sutton has not had a business license since 2016 and the appropriate measures have been taken in order to notify and receive payment from Sutton.

Jokeya Abrom said she was “truly disturbed” by the editorial and was bothered that this was not the first controversial editorial Sutton has published in his paper. She asked if the city council had any plans to take action against Sutton for the editorial.

Moore said “I know I’ve had some calls today about taking his license away from him, but I don’t think that can happen for the simple reason that he doesn’t have one, but he’s about to get one.”

Moore said that in early January city hall employees found that Sutton has not had a business license since 2016 and has been sent a notice and a letter requiring payment for three business licenses dated 2017, 2018 and 2019 as well as all penalty fees accrued.

Sutton has until March 4 to reply to the letter. If there is no response by then, he will be violating city ordinance and can be summoned to court. If he is found guilty, Sutton could face a fine and the closing of his business. As Sutton still owns the Democrat-Reporter, he is still responsible for the business license, according to Secretary to the Council Bruce Ward. As of Friday, March 1, Elecia Dexter, the paper’s new editor/publisher since Feb. 21, said all necessary payments have been mailed to city hall.

Moore said the lack of a license the past three years had been accidentally overlooked by municipal employees.

Councilwoman Vonda Wilson was also sworn in by City Attorney Woody Dinning at the meeting. She will serve District 5 for the remainder of the late Councilman Jimmy Pope’s term. 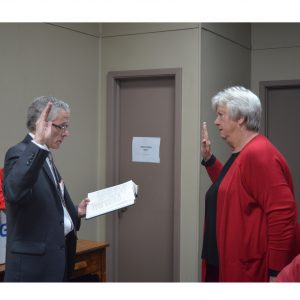 Following the council’s regular meeting, a joint meeting with the Utility Board was held while the audit reports.

Billy Cox, a shareholder with Aldridge, Borden & Company, first gave the audit report for the city sharing that they have a working capital of $918,000 and six-months worth of expenses in reserve.

“We need to try to protect that reserve because six months is adequate but not great,” Cox said.

Under the general fund, there was a reported $50,000 loss. Costs related to public safety, streets and maintenance and general government collectively resulted in an $140,000 of additional expenses for the year.

In the audit report for the Utility Board, Cox said they have an unrestricted balance is at $1.1 million with 15-months worth of expenses covered. There is also $129,000 in accounts receivable and a restricted net position of $908,000. Customer deposits equal to approximately $150,000.

(This article originally appeared in the Wednesday, February 27 issue of the Demopolis Time