The K-9 completed several months of training at Alabama Canine in Tuscaloosa before joining the DPD and partnering with Ochiltree, who also underwent a four-week narcotics K-9 handler course and was previously partnered with the department’s former police dog, Bo. 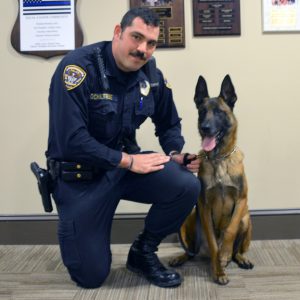 Officer Josh Ochiltree with the Demopolis Police Department’s new K-9 Officer, Hondo. The K-9 is a 3-year-old Belgian Malinois and will aid in narcotics investigations.

Ochiltree said that Hondo will be with him at all times, as was Bo who retired one year ago and still stays with Ochiltree, which creates a strong relationship between the pair.

To graduate from Alabama Canine, Hondo had to show proficiency is finding five different odors. Ochiltree’s own certification came from showing he was able to handle Hondo properly.

Ochiltree described Hondo as friendly and laidback as long as he’s not in his cage.

“That’s about the only time I’ve ever seen him bark,” he said.

Ochiltree, who has been a K-9 handler for the last three years, also said he enjoys being partnered with Hondo and other K-9s.

“It’s probably the most fun thing you can with within law enforcement,” he said, adding that work doesn’t feel like work thanks to his partner.

(This article originally appeared in the Wednesday, February 20 issue of the Demopolis Times.)