A Linden teenager was arrested Monday for alleged involvement in a shooting that left one man wounded Saturday night in Demopolis.

Quartavius Hudson, 19, was arrested by Demopolis Police Department investigators and charged with one count of throwing/shooting into an occupied vehicle. 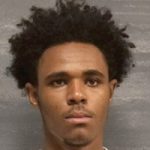 DPD officers responded to the scene of the shooting Saturday night.

According to a DPD statement, police responded to a business on Hwy. 43 South, formerly known as “The Garage,” where the shooting occurred. The owner of that building told officials he had rented the facility for a birthday party.

During that party, an altercation took place involving multiple people and shots were fired resulting in one unidentified male being wounded. He was transported to Bryan W. Whitfield Memorial Hospital and then transferred to DCH in Tuscaloosa and was in stable condition as of Sunday, police reported.

DPD Chief Rex Flowers said additional arrests could be forthcoming. He also said the wounding of the victim may have been unintentional and that it is unclear who fired the shot. The case remains under investigation. Hudson was processed and transported to the Marengo County Detention Center to await a bond hearing.

(This article originally appeared in the Wednesday, February 27 issue of the Demopolis Times.)