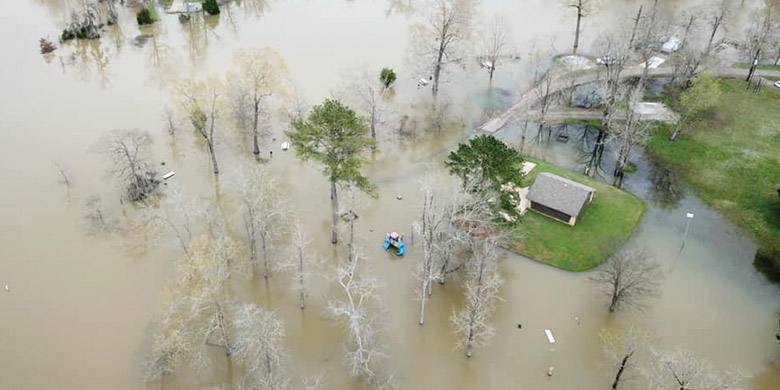 The rising river flooded the area where Commissioners Avenue meets Childers Street at the Demopolis City Landing. According to readings at the Lower Pool, the river rose to 82.8 feet on Sunday, more than five feet above the flood stage of 77. Photo courtesy of Steven Aultman.

Due to heavy rainfall over an extended amount of time, local officials are dealing with extensive flooding along major waterways, including the Black Warrior and Tombigbee rivers.

Local flooding led to the closure of Gandy Ferry Road, leading up to the Demopolis Lock and Dam, as well as a section of Commissioners Avenue where it meets Childers Street at the City Landing.

Officials said two homes at the end of N. Ash Street, in the Brickyard area, were in danger with one family  evacuating as their home became almost surrounded by water.

Water levels peaked over the weekend with readings from the Lower Pool reaching 82.8 feet on Sunday. Flood stage there is 77 feet. As of Tuesday, that level had receded to 78.6 feet.

Demopolis Projects Manager Mike Baker said crews are keeping a close eye on water levels as well as streets that may have been damaged from being submerged under water.

“When streets are submerged, water can sip through the cracks and cause damage. We won’t know the damage immediately, but we’ll be keeping an eye on those areas,” Baker said.

Officials with the city’s Public Works and Public Safety departments met to discuss its emergency plan. “We made sure to have people in place and that everyone knew certain situations to watch out for,” Baker said.

The rising river also led to changes along the waterways.

The U.S. Army Corps of Engineers Mobile District said the continued rainfall in the northern regions of Alabama and Mississippi, was impacting navigation traffic on inland waterway systems. The high water levels caused the closure of several locks, as well as creating shoal areas obstructing as water levels drop.

The Demopolis Lock and Dam is among those closed.

“River levels remain too elevated on the lower Tenn-Tom Waterway and Black Warrior/Tombigbee Waterway Rivers to allow the hydrographic surveying necessary to identify other areas of shoaling impacting navigation,” according to a statement released by the Corps of Engineers.

Last week, the Corps announced it was closing until further notice several recreation areas along the river, which included Spillway Falls Park and parts of Foscue Park. Clean-up efforts are planned with the goal of re-opening those areas as soon as possible.