Demopolis resident Bertha Bailey turned 100 years old in February and she has spent almost of those years in Marengo County. 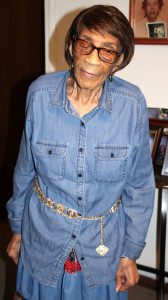 Born on Feb. 18, 1919 in Jefferson, she grew up the daughter of a farming family. She grew up to have a large family of her own, with five children, 17 grandchildren, 18 great-granchildren, and four great-great-grandchildren.

Her husband Ed Bailey, was in the military and passed away in the 1980s.

Bertha said the road to 100 has been an adventure and that she feels blessed.

One of the things Bertha has enjoyed most over the years is watching her family grow, both in age and numbers. “I never thought I would have such a large family, but I’m blessed to have them all,” she said.

The family celebrated the milestone event with a birthday celebration with family and friends on Saturday, Feb. 16, at the St. Paul Baptist Church Family Life Center.