The Tigers earned their fourth win, bringing their season record to 4-6.

The Lady Tigers, however, tacked on their seventh loss, bringing their record to 5-7.

The Tigers played well throughout their game against Gordo. The first inning went quickly with each team getting three outs. Hudson Holley was the starting pitcher for the Tigers. 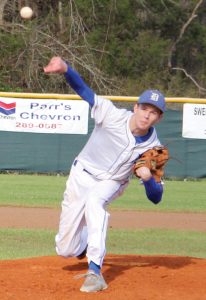 Hudson Holley earned the victory for the Tigers in a 5-2 win over Gordo.

In the second inning, the Tigers got three outs and then went to bat. Payton Geary earned a walk and Trey Malone and Jackson Cox each singled to fill the bases. Price Smith came up with a double to bring Geary and Malone home, leading to a 2-0 edge for the Tigers to end the second inning with DHS leading, 2-0.

The Tigers showed off their defense in the third inning with a double play followed by a strike out.

Gordo put two runs on the board in the fourth to tie the game at two.

In the fifth inning, the Tigers called on Davis Petrey to pitch and held off Gordo.

In their half of the fifth, the Tigers saw Hayes Atkins and Petrey eachh get on base and each came into score on a Hunter Thrash homerun. The homer gave the Tigers a 5-2 lead. The sixth inning went by quickly, with each team getting three outs without any further scoring. The Tigers would give up a walk in the seventh, but would hold onto their 5-2 lead and preserve the victory.

The Tigers traveled to Pelham on Saturday where they dropped both games of a doubleheader, 14-2 and 6-5.

The Tigers will host Central Tuscaloosa on Thursday, March 21, at 7:30 p.m.

The Lady Tigers fell short in a defensive game against Bibb County. 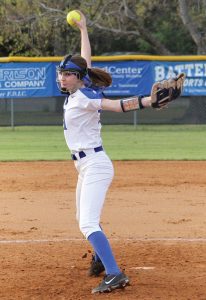 Lizzie Cannon was the starting pitcher for the Lady Tigers in a contest against Bibb County on Saturday. DHS fell short in that contest, 2-0.

The first inning began with Lizzie Cannon pitching and the Lady Tigers got three outs at first.

In their half of the inning, Abby Grace Cameron reached based, but was not stranded there with no score. The second, third and fourth innings each went by without either team scoring. In the fifth, Bibb County broke through on offense with a series of hits to take the 2-0 lead.

The Lady Tigers were unable to respond in the fifth and sixth inning. Bibb County also could not get anything past the Lady Tigers and relief pitcher Ashton Moorer.

In the seventh inning, the Lady Tigers got three outs quickly to give themselves a chance to come back and win, but Bibb County responded just as quickly, ending the game at 2-0.

The Lady Tigers followed that loss with a county-rival victory over Sweet Water on Monday, 10-0. Their overall record now stands at 6-7.

The Lady Tigers will travel to Central Tuscaloosa on Thursday, March 21, 5 p.m.