The Demopolis Police Department was involved in a chase on Friday at approximately 11 p.m. that led to the pursued vehicle driving off the road and into the canal after coming to a dead-end on W. Pettus St. The driver exited the vehicle and fled on foot while the two passengers were transported to Bryan W. Whitfield Memorial Hospital for minor injuries. 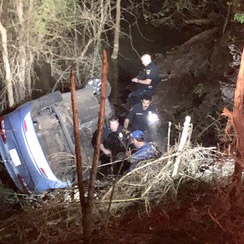 A high speed chase ending with the vehicle driving into the canal before the driver attempted to flee on foot and two suspects being arrested took place on Friday.

The chase began when DPD Officer Darryl Reeves attempted to make a traffic stop on a blue Hyundai near the intersection of Walnut Avenue and Pettus Street. After the officer activated his blue lights, the vehicle fled West on Pettus Street, approaching the dead-end of W. Pettus St. and driving into the canal.

Six other responding officers, Demopolis Fire and Rescue and Amstar were called to the scene and two passengers were transported to Bryan W. Whitfield Memorial Hospital for minor injuries. The driver was later located approximately an hour later by DPD officers in the canal and taken into custody and transported to the hospital for minor injuries and hypothermia. All three individuals were released from the hospital approximately two hours after being admitted.

Officers arrested the two subjects in connection with the incident at approximately 2 a.m. on Saturday. Anthony Lamar Wilder, 18 of Detroit, Michigan, was arrested and charged with duty to give information and render first aid at an accident with physical injuries, attempting to elude law enforcement, possession of marijuana second degree and Driving under the Influence. Mikhail Deshawn Gee, 21, of Selma was arrested and charged with attempting to elude and possession of marijuana second degree.

Gee was released on bond on Sunday, while Wilder is still being held at the Marengo County Jail.