We’ve all known some remarkable and memorable merchants in our day and in our area, but this day we are reaching back to 1942 when Wilbur and Betty Atkeison decided to open Gritney Grocery located in North Demopolis close to the river, the spot where Mr. G’s opened an Italian restaurant years later. They began this venture and adventure against the advice of their fellow merchants in town who warned that they could not compete on a cash only basis, and would have to charge groceries to stay in business. This couple, whose picture taken in 1942 appears with our column, proved everybody wrong, and started big doings in the City of Rivers. 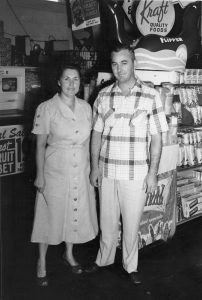 The Atkeisons then made another surprise move, and franchised into Jitney Jungle, finally moving their business to Cedar Street in 1956, and taking the now famous name of Food Fair.

I spent some quality time with their daughter, Carolyn Webb, in helping to prepare this column, and enjoyed gazing at the many pictures she brought that triggered my own memories. There was one of Roy Jordan’s mama who won a giveaway car in 1960. There was a photo of a cracker display, but not just any crackers. Wilbur had it shaped like a house with a sign informing the customers that this was over 1,000 pounds of Saltines. Then there was a picture of his famous billboard that was always changing. In 1965 there was a pose of Wilbur and a number of his employees kneeling down praying that they could continue in business since Kwik Chek was preparing to open in competition.

Then there was a picture of a Graves Company Truck parked in front of the old Jitney Jungle store with a sign saying: “Bound for Jitney Jungle – Demopolis. Enough Mother’s Best Flour for 750,000 delicious biscuits.”

There were constantly eye catching displays at Wilbur and Betty’s stores appealing to folks of all ages. This couple made it their business to never run out of groceries people came in to buy, but one of the lingering recollections their former customers still cherish, and wish for these days is Wilbur and his key employees keeping their eyes on the checkout stations, and if there were as few as three customers waiting to place their groceries on the counter, there would magically be another isle open up. How did they do that?

Merchants of merchants without a doubt. Wilbur and Betty set the bar for those who aspired to be successful in business, and not just the grocery business, and they loved their work, their employees, their customers and folks.

But wait before we go. This couple touched so many lives in other ways that seldom got any publicity because that is the way Mr. & Mrs. Atkeison wanted it. They gave and gave and gave in secret. The family shared one story with me about a very poor woman and her baby from out of state breaking down in their old car in Demopolis. The baby had a bread wrapper for a diaper, but not after Wilbur and Betty heard about it. That woman and her baby stayed at the Atkeison house until Wilbur had her car fixed, bought clothes for the infant, and sent them on their way with several extra bucks to the good.

So many other stories about this couple to be told, who finally sold their store after 41 years, and rested a while, but newspaper column space is scarce, and even more so with a picture, but we wouldn’t think of not featuring a photograph of this wonderful pair as they began their quest to serve the folks in the City of the People.

(This column originally appeared in the Wednesday, March 27 issue of the Demopolis Times.)