Casper signs scholarship to Huntingdon; Will play baseball for Hawks in 2020 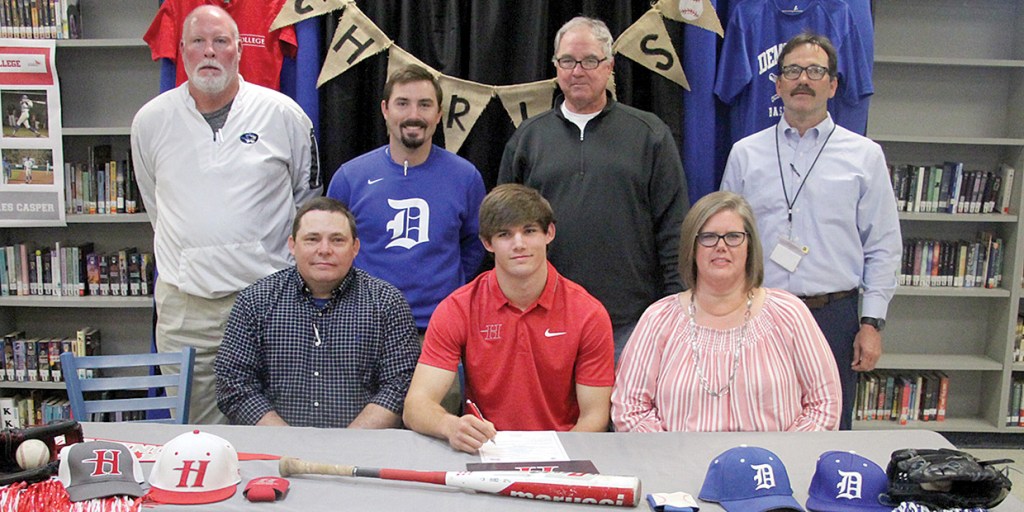 Demopolis High School’s Charles Casper signs a scholarship to Huntingdon College where he will play baseball for the Hawks. Casper is pictured with his parents, Lane and Angie Casper, along with coaches James Moody, Kole Thrasher, Mike Randall, and Trey Smith.

Demopolis High School senior baseball standout Charles Casper will be taking the field for the Huntingdon College Hawks next spring.

A signing and reception was held on Thursday, March 21, at DHS when Casper signed a scholarship to Huntingdon, surrounded by his family, coaches, and Tiger teammates.

Casper said his decision to attend Huntingdon was based on many factors.

“I took a lot of time to think about it, but there are a lot of great things about Huntingdon, not just baseball. I felt that was where the Lord was directing me to go,” he said.

Casper said he will be playing the outfield for the Hawks next season and that he looks forward to contributing to the team.

“Huntingdon puts together good players are I look forward to a competitive season,” he said.

Currently, the Hawks are 18-5 on the 2018 season and are ranked twelfth nationally.

On the same day as his signing, Casper led the Tigers to a big win over  Central Tuscaloosa as he drove in seven runs on three hits, in a 20-1 victory.

Casper holds a .308 batting average in three seasons with the Tigers with two homeruns, 11 doubles, 36 RBI, and an on-base percentage of .387, according to MaxPreps.