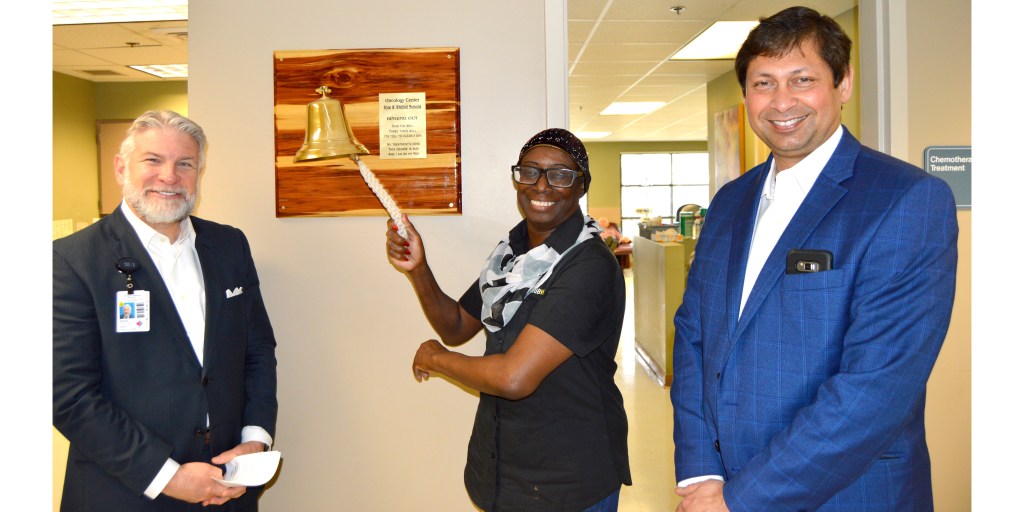 Gloria McCollum rang the bell at the Cancer Care Center of Demopolis signifying her last cancer treatment and the beginning of her remission. Pictured from left are Doug Brewer, CEO of Bryan W. Whitfield Memorial Hospital, which houses the care center; McCollum; and Ashivini Sengar, oncologist, hematologist, internal medicine physician.

For Gloria McCollum, who just celebrated the start of her remission a year after being diagnosed with Stage 3 breast cancer, the scariest part wasn’t the diagnosis. It was the unknown.

Gloria is a hard-working woman who, even at 68 years old, tended to hold off on going to the doctor for as long as she could. That’s why when her health first began to decline, she passed it off as nothing more than aging. Eventually, however, she couldn’t hold off anymore and drove from her Eutaw home to visit Dr. Ronnie Chu in Demopolis, who diagnosed her.

Gloria was shocked to learn she had breast cancer.

“I didn’t have it in the family. I didn’t know anyone who was close to me who had it,” Gloria said.

Three days after her diagnosis, she underwent a mastectomy. A week after her surgery, she began chemotherapy followed by radiation therapy treatments.

Gloria said the hardest part of learning she had cancer was telling her loved ones.

Of all the things she was worrying about, like how she would make a living while undergoing treatments, not knowing how the cancer or the treatments would affect her scared her the most because she had no one close to her that she could talk to about it. No one she knew had experienced what she was about to experience.

However, she said the staff at Bryan W. Whitfield Memorial Hospital understood her concerns and made sure she was comfortable whenever she came in for treatments.

“They just talked and laughed. They talked to me about simple things,” Gloria said. The staff also explained each treatment and what Gloria could expect from it, which helped her mentally prepare of herself and keep her spirits up — a difficult to do if she didn’t even know what she was facing.

Throughout the whole experience, Gloria leaned on the support of her 12 siblings, most of all her sister, Bernice, who accompanied her to every appointment and eventually moved Gloria into her home. Gloria’s son Nicholas, who lives in Georgia, visited her every chance he could as well. Her faith and prayers also gave her strength over the last year.

The staff at BWWMH also provided more than just medical support when they helped Gloria through her treatments and recovery. Eventually, they bonded and Gloria said “They were nurses in the beginning, but in the end, they were friends to me and my sister.”

Gloria has often participated in cancer walks and donated to the cause in the past, but she said that this year it will be more personal to her than ever.