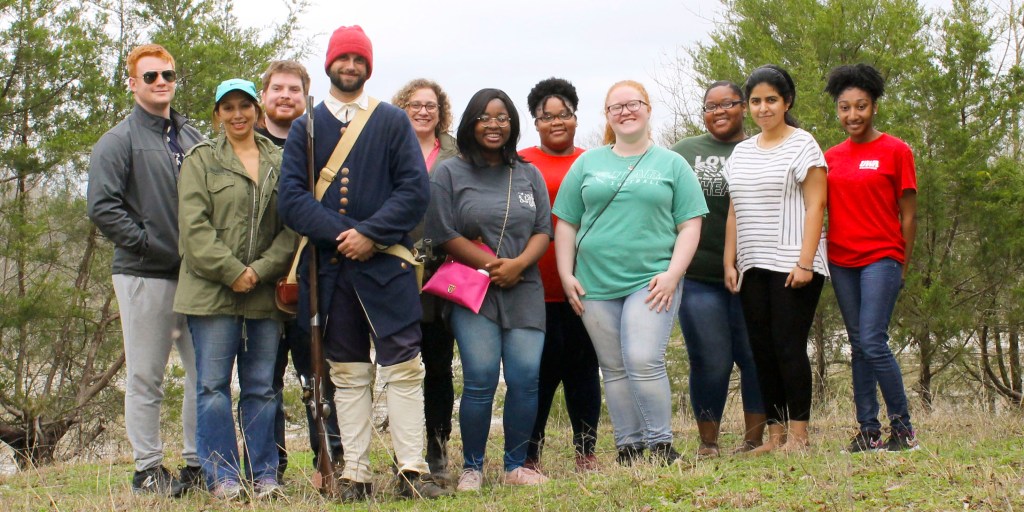 UWA students traveled to Fort Tombecbe recently to explore Sumter County’s French history as part of a series celebrating the Year of France with UWA International Programs. The series was made possible through support from the Cultural Services French Embassy, which awarded UWA a France on Campus Award. Fort Tombecbe served as a hardship tour for French marines dating back to 1736. The site now offers experiential learning opportunities for students.

A group from the University of West Alabama explored the historic Fort Tombecbe recently to learn more about Sumter County’s French history. The tour was part of UWA International Programs Year of France series. A picnic on the grounds and tour of the archaeological site was led by site director Dr. Ashley Dumas.

The tour is part of a series of events celebrating the Year of France, with the support of Cultural Services French Embassy in the U.S. Headquartered in Atlanta, the Embassy recently awarded UWA’s International Programs with the France on Campus Award, which helps student organizations launch or continue a major France-related project on campus by providing funding and mentoring. This grant award allowed International Programs to offer and promote the picnic at Fort Tombecbe.

The group travelers left campus and traveled the backroads of Sumter County, across the cattle guard, and through the muddy woods to the historical site of Fort Tombecbe.  The sponsored brown bag lunch was served under the pavilion that sits on the bluffs of the Tombigbee River. Following lunch, Dumas led the group around the site, discussing the rich French and Indian history of the fort.

Fort Tombecbe is located in Sumter County and originally served as a hardship tour of the French Marines dating back to 1736.

“The most powerful world empires of the 18th century competed to claim the interior of North America, and For Tombecbe was a strategic win for the French,” Dumas said. “On the white bluffs of Epes, they managed to make an alliance with the powerful Choctaw nation and prevented the British from fully invading this region.”

Today, UWA and the Archaeological Conservancy own Fort Tombecbe and surrounding acreage. The University uses the site for experiential learning opportunities, including living history programs and archaeological excavation studies.

Black Belt Museum Public Historian Brian Mast donned full French Marine attire and talked about the lives of the men who lived at the fort, and he performed a black powder musket demonstration.

“UWA and Sumter County are incredibly fortunate to have such an important piece of history,” Dumas said. “I welcome faculty, staff, students, and the community to contact me for tours or to host their own events at Fort Tombecbe.”

Fort Tombecbe is accessible only by appointment.  Anyone interested in arranging a tour or living history demonstration should contact Dr. Ashley Dumas at adumas@uwa.edu or Brian Mast at bmast@uwa.edu.