The fourth annual Rooster Day, hosted by the Marengo County Historical Society, will take place on April 13 in the public square. This year marks the 100th anniversary of the 1919 Rooster Auction, which serves as inspiration for the event.

Amanda Hall is co-chair of the event with Suzanne Young for the second year in a row. Hall said that MCHS Operations Director Kirk Brooker has a special history lesson in store for attendees to celebrate the anniversary. It will take place in the public square at 1 p.m. 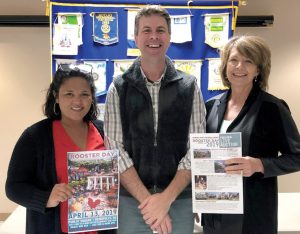 “It won’t be boring. It will be fun and fabulous and educational,” she said.

The day promises to be filled with fun and classic activities. The Cock’s Crow 5K or 1K begins at 8 a.m., with online registration currently open on roosterdaydemopolis.com. Handmade arts and crafts and local food can be found at Rooster Fair in Public Square from 9 a.m. to 4 p.m. Children can enjoy several Coop Games, like the petting zoo, bouncy houses and crafts, and the entertainment stage will be the site of singers, dancers, skits and a 4H chicken demonstration.

That evening, Rooster Auction at Lyon Hall will last from 6-11 p.m., with a silent and live auction both taking place throughout the night. Taylor Hunnicutt and her band will take the Foster Farm’s Fowl Play stage until 11 p.m., as well. The Rooster Auction is a BYOP event with set-ups and heavy hors-d’oeuvres. Admission is $20 at the gate.

Items up for auction are donated goods or services, and the live auction features packages such as a stay at the Grand Hotel Golf Resort & Spa, a two-person guided deer hunt on 3,000 acres and a ten-couple dinner soiree at Soggy bottom Lodge Shack 33.

Despite this year’s event marking the major anniversary, Hall said the historical society has been too busy with several other events and celebrations to feel any extra pressure. Events like the annual Mardi Gras Masquerade Ball and Canebrake Homecoming are just two other events that MCHS has hosted since the beginning of the year.

“We’ve had six huge events leading up to this,” she said, adding “It’s been a great year for us.”

Hall called the Rooster Day Committee a group of amazing people, all volunteers busy with their own jobs and families.

“We have a great committee, and we are super excited about Rooster Day.”

The 1919 Rooster Auction was held in Demopolis to raise funds to build a bridge over the Tombigbee River to connect Marengo and Sumter counties as the final link in the Dixie Overland Highway. President Woodrow Wilson donated a rooster to the auction, and Helen Keller donated a blue hen, which she considered to be a more lady-like alternative.

MCHS created Rooster Day four years ago as a fundraiser to benefit the society’s historic preservation efforts, as well as a way to celebrate the city’s unique history.

For more information, visit roosterdaydemopolis.com, call 334-289-9644 or check out the Facebook Page RoosterDayDemopolis.