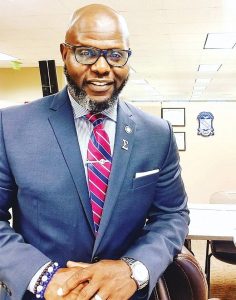 Monaleto Irby has been elected as the Georgia State Director of Phi Beta Sigma Fraternity.

Irby who served as First Vice State Director from 2017-2019, will now lead the service organization for the State of Georgia. Phi Beta Sigma was founded January 9, 1914 on the Campus of Howard University. The Founders deeply wished to create an organization that viewed itself as “a part of” the general community rather than “apart from” the general community. From its inception, the Founders also conceived Phi Beta Sigma as mechanism to deliver services to the general community Rather than gaining skills to be utilized exclusively for themselves and their immediate families, they held a deep conviction that they should return their newly acquired skills to the communities from which they had come. This deep conviction was mirrored in the Fraternity’s motto, “Culture For Service and Service For Humanity”.

Irby a 1993 graduate of Demopolis High School, received an athletic scholarship in Football to Jacksonville State University where he graduated in 1997. Irby became a member of Phi Beta Sigma through the Pi Kappa Chapter at Jacksonville State in April 1996. He also currently serves as the Vice President of the Xi Chi Sigma Chapter in Atlanta Georgia. With his new role, Irby will now serve on the Southern Region Board of the Fraternity, which includes; Alabama, Mississippi, Georgia, Florida, and the Bahamas.

Irby is employed with the Georgia Department of Juvenile Justice, where he serves as a Training Program Director in the Office of Training.