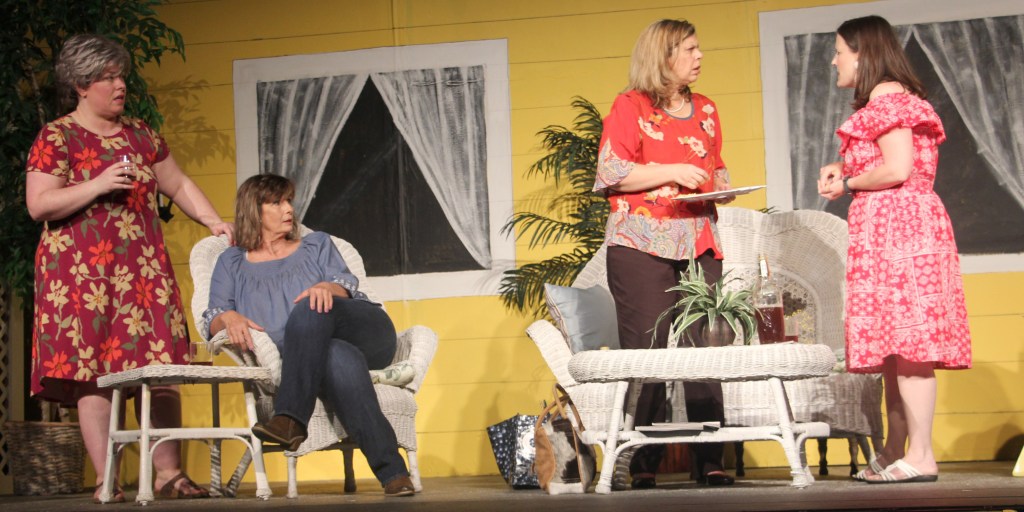 The cast of ‘Savannah Sipping Society’ includes, from left, Kelley Mullins as Dot, Laurie Willingham as Marlafaye, Donna Bishop as Randa, and Kelly Easter as Jinx. The play opens Friday with performances continuing through Monday.

The Canebrake Players will take the stage this weekend for it’s latest production, “The Savannah Sipping Society.”

The play centers on four women who each are looking to move on from their problems of the past. It was co-written by Jessie Jones, Nicholas Hope, and Jamie Wooten, the authors of “The Dixie Swim Club,” a play previously performed by the Canebrake Players. The director of “Dixie Swim Club,” Johnny Johnston, is also directing “Savannah Sipping Society.”

“The members of the Canebrake Players Board like to do different things. Having done ‘Dixie Swim Club’ we knew this play would be funny, but have some poignant moments as well,” Johnston said.

The cast is made up of three Canebrake Players veterans along with Kelly Easter, who is making her Canebrake debut. Donna Bishop is playing the role of Randa, Laurie Willingham is Marlafaye, Kelley Mullins is Dot, and Easter plays Jinx. Sandra Booen also appears as “grandmother.”

“When I saw this play, and remembering the fun I had working with these ladies on ‘Swim Club,’ I decided to sign on as director. I knew I wouldn’t be by myself and we have a great cast and crew,” Johnston said.

While the play features a female cast, Johnston said most everyone would relate to the problems the characters face.

“The Savannah Sipping Society” will be performed at the Old School on Main on Friday, Saturday, and Monday evenings at 7 p.m., with a Sunday matinee at 2 p.m. Tickets are $12 for adults and $8 for students. The play is rated PG for adult-oriented humor and innuendo.