Through Duff’s storytelling and the illustrations of artist Mike Motz, readers see Twiggy overcome bullying and low self-esteem to gain confidence and accept who he is. 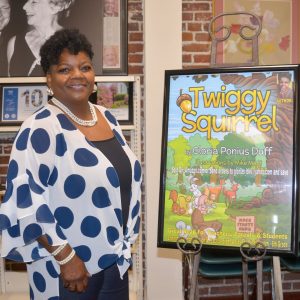 Author Gloria Ponius Duff gave a reading and signed copies for her first book “Twiggy Squirrel” at the Demopolis Public Library on April 19.

In the back of the book are questions for readers to test reading comprehension and start a dialogue about bullying, as well as tips to address bullying. The questions were added after a reading to students prior to publication as part of Read Across America, when Duff led the students in a discussion about the book and bullying.

Duff originally wrote the book 15 years ago but did not publish it until recently. She openly joked through the reading about her procrastination habits. However, Duff did explain why she finally published the story that she had been waiting for so long to do.

“I felt like it was time to go ahead and publish it because we have a lot of bullying in school,” she said. Duff said she hoped children understand the importance of being kind to others through “Twiggy Squirrel.”

The inspiration came when she was on a family trip one day when she spotted a small squirrel running up a tree and immediately turned him into a children’s character and began creating the story surrounding Twiggy.

“I just went from there. I used my imagination,” she said.

Duff self-published the book aimed at 5 to 12-year-olds through Amazon in two months and said a large part of the process was coordinating with Motz, who lives in Canada, and making sure the art matched her own visions.

While this is Duff’s first novel, it is not her first published work. Since 2015, she has had four plays performed, two in Demopolis and two in Butler, Alabama. Duff plans to continue publishing books and has been writing since she was a child.

“I love writing because you can escape and just use your imagination. It’s just very therapeutic,” she said.

Duff also encouraged the kids in the audience to write their own stories. “We all have imagination. We all like to create.”

“Twiggy Squirrel” is available in paperback on Amazon for $13 or through Duff for $12. To order a copy through the author, email gloria_bks@yahoo.com.