A suspect is facing charges following an armed robbery at a Demopolis business. 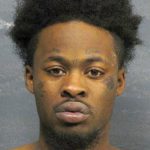 According to Demopolis Police Chief Rex Flowers, an officer was in the area of the armed robbery and quickly found Alston traveling at a high rate of speed. A pursuit began that went to the east side of Demopolis before Alston left his vehicle and ran away on foot. He was  found hiding in a garbage can.

In addition to the local charges, Alston is also wanted on felony charges, including robbery and escape, in North Carolina, Georgia, and Tuscaloosa.

He is being held at the Marengo County Detention Center with no bond. A Eutaw police officer in the area, the 17th Judicial Task Force, and Alabama State Troopers assisted in the pursuit

“I would like to thank the patrol officers for the quick response in this case and the assistance provided by officers from other agencies, which led to the apprehension of this suspect,” said DPD Chief Rex Flowers.