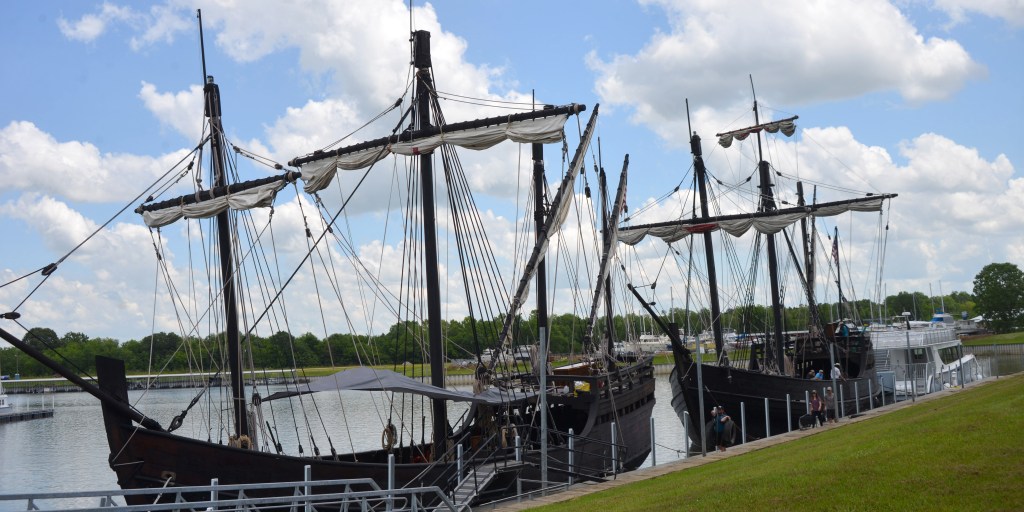 The Columbus Foundation began constructing the Niña, left, in 1988 and finished in 1991. The Pinta was built in the early 2000s, and joined the Niña in 2005. The two maritime museums travel all over the United States and log about 7,000 miles of travel each year. They will be docked at Kingfisher Bay Marina through May 8.

Replicas of two of history’s most well-known caravel’s, Christopher Columbus’ Niña and Pinta, docked in Demopolis, transporting people to the 1400s as part of a traveling maritime museum. They are in Kingfisher Bay Marina through May 8.

Informational plaques are placed around the ships and crewmembers were available for questions about the vessels. Group tours were also available by reservation. The two ships were built by the Columbus Foundation and are near-identical to Columbus’ vessels. 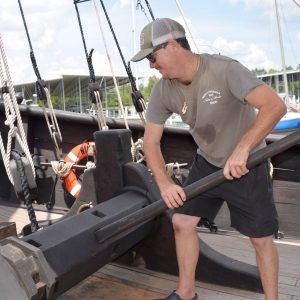 Captain Stephen Sanger of the Niña demonstrates the windlass, which is used to hoist anchors out of the sea.

The Niña is the most accurate, while the Pinta is slightly larger to accommodate up to 120 people for day voyages outside the United States to locations such as the Cayman Islands, Maruba and Saint Martin.

“The Niña is considered the most historic replica ever built,” said Stephen Sanger the captain of the ship. His brother Jamie Sanger is captain of the Pinta.

Both ships were built in Brazil, with the Niña being the first. The ship’s construction began in 1988 and was complete in time for the original voyage’s 500th anniversary in 1991. The Niña cost $500,000 to complete. The Pinta’s construction was more recent, and the ship first set sail in 2005 after three years of construction at a cost of $1 million. While the Pinta was built with a combination of hand and modern tools, the Niña was built by entirely by hand.

The two ships have sailed all over the United States, accumulating about 7,000 miles of travel per year. The crew stops at 30-40 ports on each route, which are rotated on three-year cycles.

“We’ve pretty much been up every river in the United States,” S. Sanger said.

This year’s route will take the crew to Paris, Tennessee, as the next stop May 16-19.

They sail for 10 months out of the year, with the other two months reserved for ship maintenance in Mobile.  S. Sanger has been with the ships for 10 years and J. Sanger for four. Opportunities for joining the crew are available at thenina.com. For other updates see ColumbusShips on Facebook.